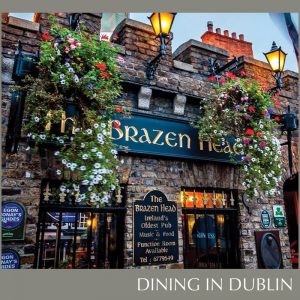 “Good puzzle would be to cross Dublin without passing a pub…”

“Good puzzle”‘ James Joyce had his humble hero Leopold Bloom wonder in his remarkable novel, Ulysses, “would be to cross Dublin without passing a pub.” It would be practically impossible, of course. There are literally hundreds of them, peppered all around the centre, and they have played a remarkable role over the years in shaping the city’s political, social, intellectual and artistic life. Revolutions, protests, great novels, plays and poems have been planned and plotted in some of the more famous of them, and the pub has always acted as a bastion of social equality and free speech in a city that was long occupied, and for a long time sternly conservative.

Dublin is probably the world’s most famous drinking city, and that of course is all down to the unique atmosphere of its pubs. Although some (The Brazen Head, for instance, which may date back to the 12th century) are older, most of the city’s more famous public houses date from the early or mid 19th century, and their beautiful interiors are typically high-ceilinged and ornate, with long wooden bars and huge mirrors along the walls.

Their appearance, though, however admirable, is a little it beside the point – Dublin pub’s aren’t renowned for their polished brass and Victorian splendour, but for their unrivalled conviviality, wit and warmth. And, however historic or grand it may be, a pub is ultimately created by its customers, and its staff.

Unlike bars in England and elsewhere, Dublin’s pubs were always privately owned, rather that the pawns of some huge brewery. This, and the fact that they were generally family-run, added to their individuality. Until the middle of the last century, most of them were male only, and predominantly working class. The city centre pubs tended to be favoured by one or other of the various trades and professions. There were actors’ pubs, bus drivers’ pubs, politicians’ pubs and dockers’ pubs. There were singing pubs, talking pubs and quiet, contemplative pubs. 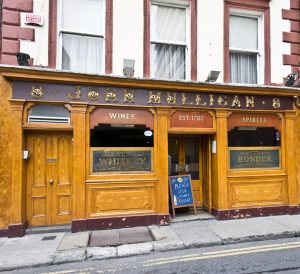 Probably the most famous of them all though, were those favoured by the city’s journalists.

Journalists tended to be extravagant drinkers, and thus the publican’s best friend. The Palace Bar on Fleet Street was for a long time associated with The Irish Times, and during the 1940s and 1950s, its star writers would gather in the wonderfully snug back room. Hacks, though, are fickle creatures, and they often defected to Bowe’s which they liked to call ‘the old lady of Fleet Street’, and O’Neill’s on Suffolk Street. O’Neill’s had one of the most sought after snugs in the city (snugs are walled-off little alcoves in which you can sit and drink privately and gossip and plot) and, although it was extensively refurbished and extended in the early 1990s, the original front bar is just as it was.

Some of Dublin’s favourite old pubs had untimely appointments with the wrecking ball during the 1970s in particular, or else were simply refurbished to death, but a good handful of the very finest remain, steadfast in a changing town. There’s been a pub on the site of Mulligan’s, of Poolbeg Street, since 1782, and the present building dates from the 1850s. It was a firm favourite of the now defunct Irish Press newspaper, as well as actors from the old Theatre Royal. The plain wooden interior has hardly changed at all since the 1920s, and has seen some eventful evenings. Mulligan’s was regularly raided by the Black and Tans during the Civil War, as it was reputed to be a popular haunt for IRA men. John F. Kennedy drank in here as a young man, as did Bing Crosbie and Gracie Fields.

Mulligan’s though, is most famous for its unfailingly excellent pint, and so is Ryan’s of Parkgate Street. It should be, of course, sitting barely a hundred yards across the river from the James’s Gate Brewery itself. It has one of the finest Victorian interiors in the country, as well as one of the cosiest atmospheres. The star of the show, though, is undoubtedly the pint.

Neary’s off Grafton Street is one of the most well known pubs in town. Perhaps that has something to do with its utterly distinctive exterior, a handsome brick and limestone front with two sculpted bronze arms on either side of the main entrance, holding aloft two lit globes. The interior is distinctly Edwardian, with plush red carpets and brass fittings, and a long, marble topped bar. If the whole effect looks vaguely theatrical, this is probably no accident – the bar has a long association with the Gaiety Theatre, its neighbour at the rear. In the days of Music Hall it was choc-a-bloc with actors, and there were even adjoining back doors between the two buildings through which nervous performers could sneak just before the curtain came up. Peter O’Toole was particularly fond of Neary’s, as you can imagine, and Flann O’Brien drank regularly here – but Flann O’Brien drank regularly everywhere! 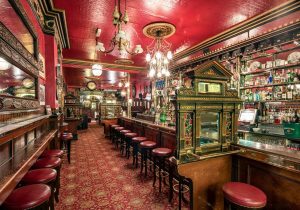 Like many of Dublin’s oldest bars, The Long Hall on Georges Street, did not admit women until the 1970s. It’s still predominantly male at the front now, but the back room is entirely another story. Many tourists pop their heads in for a pint and a look at one of the finest Victorian interiors in the city. The carpet may be a bit faded and the atmosphere rather dark, but nothing much has been changed in here over the years and the bar is wonderfully evocative of Dublin’s past.

We’ve been talking here of course about the traditional Dublin pub, beloved institutions that have been run in more or less the same way for generations. But over the past decade or two, Dublin has suddenly changed almost beyond recognition. A fairly sleepy city has become a humming hive of industry, and the pub scene has been affected as profoundly as every other aspect of Dublin life.

The old bars are still there, of course, but alongside them are now a bewildering array of sumptuous and imaginatively decorated lounges, clubs and cafés. Dublin now has a genuine choice as to where and how it will drink, and the presence of these new, dimly-lit cosmopolitan hangouts only makes you appreciate the older institutions when you go back to them.

And besides, the essence of the Dublin pub has nothing to do with wooden bars and brass fittings, it’s more about mood than décor. Dublin pubs are tolerant and convivial places, in which differences are put aside along with the cares of everyday life, and a brief moment of garralous fun can be had. Laughter is the commonest noise you’ll hear in any pub around this city, which is a sure sign that these are the places in which Dubliners truly relax. The true Dublin pub is a mood, not a building, and that mood can exist in the newest as easily as in the oldest of our city’s bars.