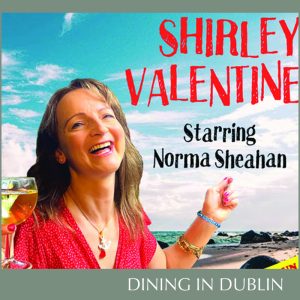 For the final time, following its two sensational sell-out runs at Dublin’s Gaiety Theatre in October 2021 and March 2022, Willy Russell’s ‘SHIRLEY VALENTINE’ makes a highly anticipated return to the Gaiety Theatre with seven performances only from 24 – 28 January 2023. Tickets from €19 (including booking fee) on sale now from www.ticketmaster.ie

This production was the first show to reopen Dublin’s Gaiety Theatre after the “covid lockdowns”, selling out to the then allowed 60% capacity,  and returning six months later to sell out again. Norma Sheahan and Vanessa Redgrave are the only two female actors to have single handedly sold out one woman shows at the Gaiety Theatre.

Treat yourself to an evening of laughter and triumph, as Norma Sheahan, one of Ireland’s leading dramatic actors, breathes new life into Willy Russell’s effervescent and iconic character SHIRLEY VALENTINE.

Trapped in a dreary marriage and humdrum life, Shirley wonders when she lost her hopeful, youthful self. With no support from her demanding husband, snooty neighbour, or self-absorbed teens, Shirley resorts to full-blown (although somewhat one-sided) conversations with her kitchen wall.  So, when a recently divorced friend asks Shirley to go on a vacation with her to Greece, she bravely gathers what remains of her dignity and begins a humorous and uplifting voyage of rediscovery. Shirley with ever-opening eyes, begins to see the world – and herself – in a different light… but will she ever go back to being “St Joan of the fitted units”?

“Need a girls night out? Need to rediscover your clitoris? Need to take your mind off the menopause? Well stop talking to the wall and join me, Norma Sheahan, for a night of filthy female fun, this January in the Gaiety!!”

Discounts for groups of 10+:  via groups@gaietytheatre.com

Government guidelines relating to COVID-19 in place at the time of the performance will be adhered to.