THIS IS NOT JUST ANY COFFEE…THIS IS AN IRISH EXCLUSIVE, PERFECTLY BALANCED M&S MAGIC COFFEE™

THIS IS NOT JUST ANY COFFEE…THIS IS AN IRISH EXCLUSIVE, PERFECTLY BALANCED M&S MAGIC COFFEE™ 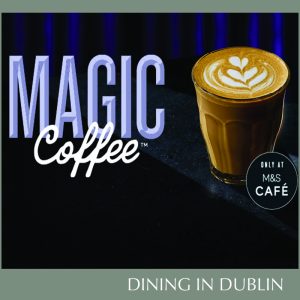 There may have only been 11 days of it so far but 2023 is already shaping up to be a historical year for coffee lovers as M&S Café brings Magic Coffee™, the hottest new style of coffee to reach Ireland since the Flat White, to its 15 Cafés across the country.

Known as “the barista’s choice” in Melbourne, Australia, where the drink first originated, Magic Coffee™ is uniquely bold coffee, without the bitterness. Served with velvety steamed milk, it is hailed as having the ‘magic’ perfectly balanced ratio of coffee to milk.

Served in a 6oz glass or cup, Magic Coffee™is smaller than a Flat White (typically served as 8oz) and half the size of a Latte (typically 12oz).

M&S Café’s Head of Coffee, Tom Rawlinson, lives and breathes coffee. So much so, he’s even built his own coffee roastery in his garage. He explains why Magic Coffee™ is so unique:

“An M&S Magic Coffee™ is made with a double ristretto, topped with the perfect amount of velvety steamed milk. It’s a short coffee with a bold, intense flavour, but because it’s made with a double ristretto rather than a double espresso, it doesn’t have as much bitterness as other shorter coffees like a Flat White or Cortado. It’s called a Magic as it is quite literally the magic ratio of coffee to milk!

I visited Melbourne in November to better understand the hype behind this coffee style. It’s a really popular coffee choice in Melbourne, and you often hear coffee lovers asking for ‘A Magic’. Though 10,000 miles is a long way to go for the latest coffee style, so we’re absolutely delighted to be bringing it exclusively to M&S Cafés from today.

At M&S Food we’re full of firsts – from pioneering the pre-packed sandwich in the 1980s to the vegan chicken Kyiv more recently. Now our Cafés get their very own ‘first’ – and our expert baristas, who we’ve been training secretly over the past few months, literally can’t wait to start making Magic for customers.”

So, what is a ristretto and why is it so different?

M&S Marketing & Hospitality Director, Sharry Cramond, has previously lived and worked in Melbourne. She said, “Melbourne is known as the coffee capital of the world and is always first for coffee trends, from experimenting with coffee styles, to exploring more sustainable sourcing and packaging. Coffee culture is so engrained into peoples’ lives, many don’t go a day without visiting a coffee shop!”