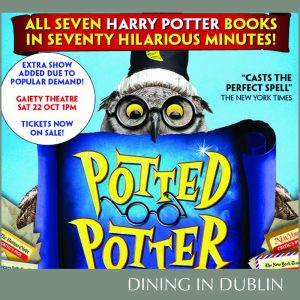 A Parody by Dan & Jeff

After playing to sold out houses all over the world, the Olivier Award nominated POTTED POTTER The Unauthorised Harry Experience – A Parody by Dan and Jeff  have announced a highly anticipated return to Dublin’s Gaiety Theatre from 8th – 12th February 2023. The announcement follows a sold out run in October 2022. Tickets from €21.50 including booking fee are on sale now from ticketmaster.ie

“Made the youthful audience holler with laughter… a hilarious success!” Irish Examiner

“The duo casts the perfect spell over the audience.” The New York Times – Critics’ Pick

The show takes on the ultimate challenge of condensing all seven Harry Potter books (and a real life game of Quidditch) into seventy hilarious minutes. This fantastically funny show features all your favourite characters, a special appearance from a fire-breathing dragon, endless costumes, brilliant songs, ridiculous props and a generous helping of Hogwarts magic!

“Gloriously irreverent. A very loveable romp through Rowling’s back catalogue.”

Created by double Olivier Award Best Entertainment nominees Daniel Clarkson and Jefferson Turner, the show is a must-see for Potter addicts and a great introduction to the series for anyone who’s ever wondered what all the fuss is about. Even if you don’t know the difference between a Horcrux and a Hufflepuff, POTTED POTTER will make you roar with laughter. This brilliant family entertainment is perfect for ages six to Dumbledore (who is very old indeed).

POTTED POTTER  has been seen by over one million muggles around the world  since it’s 2006 premiere. It has played 30 weeks off-Broadway across two sold-out seasons, as well as five West End runs, and multiple North American and Australasian tours. It is currently on tour in the USA and Canada and in residency in Las Vegas, where it recently had its 700th performance and where it won Best New Show at the Best of Las Vegas Awards in 2019.

★★★★ “Inventive, daft fun for all the family. A winner in every way!”  The Guardian

Clarkson and Turner first created POTTED POTTER in 2005 for an appearance at a London bookshop, as a five-minute entertainment for fans awaiting the release of the sixth book in the series. The show grew from there into a full-length stage production, first seen at the Edinburgh Fringe Festival 2006, and has since toured internationally for over a decade, securing an Olivier Award nomination as Best Entertainment and Family Show. All four Potted shows (Potted Panto, Potted Sherlock, Potted Pirates and Potted Potter) have earned widespread acclaim and a fan base that crosses generations.

“A stupendously silly night out.” Time Out Sydney

Tickets: From €21.50 (including booking fee and restoration levy