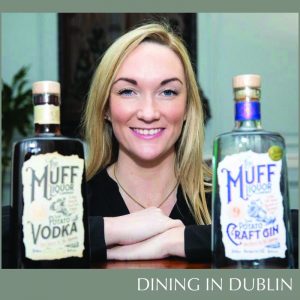 The Muff Liquor Company is a premium craft potato-based spirit company hailing from the village of Muff, County Donegal Ireland. Its products include new spirits, Muff Gin and Muff Vodka which are produced with a potato base made from four different types of Irish potatoes, distilled 6 times, to create a clean and creamy texture and both spirits are gluten free and suitable for vegans. The use of potato spirit was inspired by founder Laura Bonner’s grandfather, who was a well-known Irish potato farmer with a penchant for making his own poitín.

This March, the brand prepares to launch into the UK as it hosts its first UK pop up in London’s iconic Camden Market. The Muff Liquor Company pop up bar will be part of the Market’s London Irish take over, part of the official Mayor of London’s St Patrick’s Festival. It will run from Sat 14th – Sun 15th March 2020.

The Muff Liquor Company is founded by Irish entrepreneur, Laura Bonner. Born in Donegal, her grandfather was a famous potato farmer, Philip McClenaghan who had a passion for making poitin with potatoes. Inspired by her grandfather’s hobby, from an early age, her dream was to one day turn making a potato-based spirit that would originate from Ireland into a business. Following a career of law and property in London, aged 33, she made the decision to return to Ireland to fulfil her childhood dream and set up the distilled spirits company, specialising in the production of traditional potato-based spirits. Launching in Ireland in Feb 2018, just 13 weeks old Muff Gin won Gold at the 2018 WSWA expo in Las Vegas, and has since won numerous awards including Gold at the Gin World Masters Asia 2018, Best in Ireland at The UK Gin Guide Awards 2019, and Gold at the Irish People’s

Having already secured global accounts with African & Eastern in Dubai, Australian distribution Coles Liquor (one of the largest companies in Australia with over 1300 stores) commencing June 2020 and its first shipment to Germany this month, Muff Liquor Company is looking to take on the UK market as its next challenge, and introduce its vodka and gin to the British audience.

Muff Gin is a premium craft gin produced using a potato base made from 4 types of Irish potato. Using a pot still distillation process, it features an aromatic blend of 9 botanicals, mandarin, elderflower, grapefruit peel, juniper, rosemary, lemon, angelica, lime and champagne essence. The gin is one of very few to be distilled 6 times, resulting in a clean and creamy finish.

Tasting Notes: Zesty citrus, a hint of elderflower and a little kick of spice lead, before bittersweet mandarin emerges.

Suggested Serve: Always serve with orange garnish to enhance the notes of mandarin.

Muff Vodka is a premium potato-based spirit. It is distilled 6 times to create a clean and creamy texture with great viscosity making it suitable to be enjoyed neat, and has an added hint of vanilla.

The Muff Liquor Company is a homage to Laura’s grandfather, Philip McClenaghan, who has inspired not just the product itself, but the brand design throughout. The bottle’s shape was inspired by the medicine bottles Laura’s grandfather used to keep the poitin he made in, whilst the illustrations on the bottle labels echo old recipe and ingredient journals he used to keep. The brown glass of the vodka bottle resembles the earth and soil of the potatoes from which it is made whilst an old photograph of Laura’s grandfather appears on the back of every bottle, as a testament to the hardworking values he upheld.

Londoner’s keen to get a taste of Ireland are invited to head to the Camden Market Muff Liquor Pop Up open Saturday 14 – Sunday 15th March as part of the Market’s London Irish takeover, supported by the official Mayor of London’s St Patrick’s Festival. Camden Market, London, NW1 8AF

The Muff Liquor Company founder, Laura Bonner (pictured) comments: “Our first UK pop up is a huge opportunity for us to showcase our products to a new audience. Camden Market is an iconic London hotspot, which i’ve always loved. It attracts Londoners and visitors from across the globe who seek out new experiences, unique products and a little bit different, so we felt like it was a natural fit for our first UK activation. We hope to bring some great craic and cocktails to the Market’s Irish celebrations and give Londoners a taste of Ireland with our traditional craft potato inspired gin and vodka recipes with a modern twist.”

Muff Gin & Muff Vodka are both available from TheMuffLiquorCompany.com and Masterofmalt.com. Price RRP From £36.00