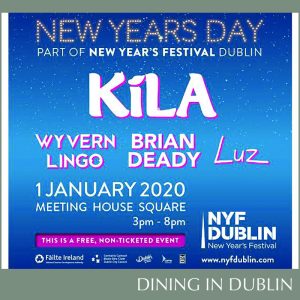 Dublin City is set to become a bustling hive of activity as New Year’s Festival Dublin continue their celebrations into January 1st with the New Year’s Day Concert.

Guaranteed to be one of the highlights of New Year’s Festival Dublin – visitors, families and friends of all ages are invited to kick start 2020 in style. Come celebrate and enjoy an afternoon of live music in Temple Bar, the cultural heart of Dublin city.

Today, New Year’s Festival Dublin are excited to announce the line-up for the New Year’s Day Concert featuring a host of Ireland’s finest musicians – headliners and live favourites Kíla will be joined by special guests Wyvern Lingo, Brian Deady and Luz. Celebrate the start of the year at the free, family-friendly concert taking place in Temple Bar’s Meeting House Square from 3pm to 8pm on 1st January 2020.

Celebrating a career spanning over 30 years, Kíla are heralded as one of Ireland’s most innovative and exciting bands. Their unique sound has been ever evolving, rooted in tradition, yet inspired by a myriad of influences and ideas from all around the world. Renowned for their live energetic performances the band have played around the globe in over 30 countries and at some of the world’s top festivals including Glastonbury and Electric Picnic.

As one of the country’s hottest live acts, having toured Ireland, the UK and Germany, it came as no surprise when Wyvern Lingo’s self titled debut album shot to No. 1 in both the Independent Irish Charts and the Irish iTunes Charts, receiving critical acclaim across the board. The trio are guaranteed to deliver a killer show.

Brian Deady exploded into the mainstream when his single “Clap Both My Hands” became one of the most played Irish songs of 2016 – reaching No.1 in the Spotify UK Viral charts – and he’s been on an upward trajectory ever since. Sounding more like he was raised in the Deep South rather than Cork, his rich, soulful voice promises to leave audiences spellbound.

With her powerful voice and emotive storytelling, Luz first caught attention with a Dean Lewis cover that led him to invite her to support him in Dublin. Since then she has gone on to support the likes of Kodaline, Little Hours and Mick Flannery, and as one of the most exciting new voices on the scene her future is looking incredibly bright.

Ciara Sugrue, Head of Festivals at Fáilte Ireland, said: “We are delighted to work with Dublin City Council on the New Year’s Festival Dublin again this year to not only offer an amazing line up on New Year’s Eve but also on New Year’s Day, so visitors to the capital can continue their celebrations. Over the two days, the city will come alive with some of Ireland’s finest musical talent to ring in the New Year in style. Festivals and events like this are crucial to the tourism sector and the New Year’s Festival Dublin not only provides a boost for tourism businesses in Dublin at an off-peak time of the year, it also gives overseas visitors to Ireland a unique opportunity to experience the very best of our culture, people and places.”

Now in its eighth year, New Year’s Festival Dublin (NYF Dublin) will be bigger and better than ever with 4 spectacular events set to take place over 2 days on 31 December 2019 and 1 January 2020.

Dublin City will come alive over 2 days of fun filled New Year’s festivities with 3 spectacular countdown events at the iconic Custom House – Liffey Lights Midnight Moment – Matinee, the Countdown Concert and the Liffey Lights Midnight Moment – and on 1 January 2020 families and friends can continue the New Year’s celebrations by kick-starting 2020 in style at the New Year’s Day Concert in Temple Bar, the cultural heart of Dublin City.

New Year’s Festival Dublin are delighted to announce the return of their three countdown events on 31 December 2019. Celebrate the New Year with headliners Walking on Cars, Ash, Aimee and Lisa McHugh at the Countdown Concert, be amazed by the world class countdown spectacles – Liffey Lights Midnight Moment and the family-friendly Liffey Lights Midnight Moment (Matinee) as you say farewell to 2019 and ring in 2020 in true celebratory style. On 1 January, come and see some of Ireland’s finest musicians with your family and friends at the New Year’s Day Concert featuring performances from live favourites Kíla, Wyvern Lingo, Brian Deady and Luz.

For additional information on all other NYF Dublin events please visit www.NYFDublin.com. Keep up to date with news about all upcoming events by using the hashtag #NYFDublin and following @NYFDublin on Twitter and Instagram.

The New Year’s Festival Dublin is a Fáilte Ireland and Dublin City Council initiative, produced and promoted by MCD Productions. With thanks to the OPW and Department of Housing, Planning and Local Government.