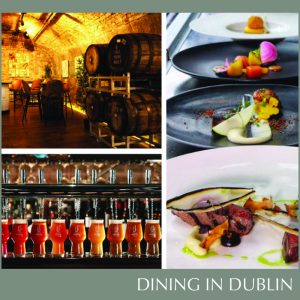 Urban Brewing, in the heart of the Dublin Docklands, is celebrating Oktoberfest with a dedicated Bavarian food offering and three special brews to mark the occasion. The celebration will run Wednesday 18th September until  Saturday 5th October daily from 4pm, in the Suntrap terrace area of Urban Brewing at the CHQ Building in the IFSC.

The Urban Brewing Suntrap drinks menu with be joined by three special brews dedicated to the brewery’s very own Oktoberfest. The first brew is a Fiestbier, a classic Bavarian style lager that’s light and finishes dry,  a Marzen which is a malty Bavarian lager, amber in colour with a clean dry finish,  and for those who prefer something a little more robust, a Bavarian Weissbier which is a wheat beer with a fruity, phenolic fermentation character. The O’Hara’s Beers core range will be available as usual, along with the very popular Stigel Weissbier.

There will also be Bavarian inspired food on offer to help people get fully immersed in the Oktoberfest experience.  Customers can expect items like Handmade Bratwurst Sausage and Pulled Pork Shoulder that compliment the special brews on offer.

Head chef Dan Keane said, “We’re really excited to launch our very own Oktoberfest celebration. My team have worked closely with the brewers to create dishes that are authentically Bavarian and compliment the special brews that have been created especially for this occasion.”

Oktoberfest at Urban Brewing will be open Wednesday 18th September to Saturday 5th October from 4pm each evening weather dependant.