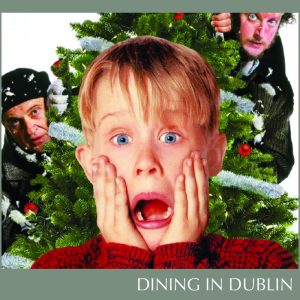 FEATURING LIVE SCORE PERFORMED BY THE ORCHESTRA OF IRELAND

TICKETS ON SALE NOW FOR DATES IN DUBLIN, KILLARNEY AND CASTLEBAR

Home Alone in Concert is coming to Ireland for the very first time, with dates at The Royal Theatre, Castlebar on 30 November, The Convention Centre, Dublin on 1 December and The INEC, Killarney on 2 December. A true holiday favourite, this beloved comedy classic features renowned composer John Williams’ charming and delightful score performed live to picture by The Orchestra of Ireland. Tickets priced from €28 (additional charges may apply) are on sale now via Ticketmaster (www.ticketmaster.ie).

Home Alone in Concert is set to be the must-see Christmas event for 2019, with over 100 performers on stage as it is shown on the big screen accompanied by full live orchestra and choir. Having previously packed out the esteemed Royal Albert Hall in London, tickets are selling fast so don’t delay.

“Ever since Home Alone appeared, it has held a unique place in the affections of a very broad public. Director Chris Columbus brought a uniquely fresh and innocent approach to this delightful story, and the film has deservedly become a perennial at Holiday time.

I took great pleasure in composing the score for the film, and I am especially delighted that the magnificent Orchestra of Ireland has agreed to perform the music in this very special live presentation of the movie.

I know I speak for everyone connected with the making of the film in saying that we are greatly honoured by this event… and I hope that the audience will experience the renewal of joy that the film brings with it, each and every year.”

Macaulay Culkin stars as Kevin McCallister, an 8-year-old boy who’s accidentally left behind when his family leaves for Christmas vacation, and who must defend his home against two bungling thieves. Hilarious and heart-warming, Home Alone is holiday fun for the entire family and comes to Ireland for the first time this Christmas.

Tickets for Home Alone in Concert Live at The Royal Theatre, Castlebar on 30 November, The Convention Centre, Dublin on 1 December and The INEC, Killarney on 2 December are priced at €59.50 (additional charges may apply) are on sale now via Ticketmaster.

Tickets from €28 (additional charges may apply) are on sale now via Ticketmaster (www.ticketmaster.ie).