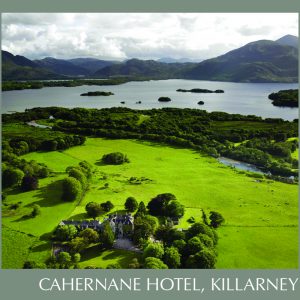 The historic, four-star Cahernane House Hotel in Killarney, Co. Kerry (Ireland) will host a very interesting package called ‘Forage and Feast’ from the 12th to the 14th of June (priced from €375 per person sharing). This very unusual and hands on foraging experience will be hosted by Darach Ó Murchú, an environmental educator specialising in wild food foraging with particular expertise in the nutritional health and benefits of seaweed.

Darach will take the guests on a guided foraging tour of the grounds at Cahernane House Hotel. The guests will be lead through the mature gardens and grounds by Darach who will point out various edible herbs and plants growing wild on the estate. He will also provide the guests with the information they need to identify various plants and will discuss habitat, plant properties, and practicalities of foraging, top tips, and more.

The two-day ‘Forage and Feast’ package begins with the guests checking in on Sunday, 12th of June where they will enjoy a welcome tea or coffee and scones and have the opportunity to meet Darach for the first time. That night, guests can enjoy dinner in the Cellar Bar (not included in the package) in the hotel before retiring to their room where complimentary Voya seaweed bath amenities will await them.

The following day begins with a hearty breakfast before the morning hands-on foraging experience begins at 10.00am. There is a break for lunch which is included in the package before the guests begin the afternoon seaweed workshop. Darach will teach the guests how to identify seaweed,while also offering practical foraging tips and best ways to prepare and use seaweed.  A keen believer in the nutritional and health benefits of seaweed he will also demonstrate how to cook seaweed and prepare it to eat. That night guests will enjoy a delectable meal, prepared by the skilled chefs in the 2 AA Rosette, Herbert Restaurant.

Darach O Murchú is a wild-food foraging guide, specialising in both land plants and seaweeds. He has been delivering formal workshops since 2012. He lives what he teaches, using foraged food almost every day for his home-cooked meals and he is constantly processing and preserving what he finds on the land around where he lives. Darach co-presented a 6-part television series on foraging in Ireland entitled Dul i bhFiáin. He has also appeared on other programs including Garraí Glas and more recently Faoi Bhláth on RTÉ 1 sharing his knowledge on plant uses.

Speaking in advance of the Forage and Feast event, Darach said, “I visited Cahernane House Hotel a few weeks ago and I had a good look around and found that there are lots of interesting edible plants and herbs growing wild all around the grounds. I expect we will be foraging hedge garlic, elderflower, daisies and a variety of other herbs and flowers.”

Cahernane House Hotel in Killarney, Co. Kerry is the perfect place to get away from it all. Removed from the main throughfare of Killarney and set on its own private grounds on the edge of Killarney National Park, the house presents plenty of opportunities for guests to enjoy a relaxing and creative getaway. The Muckross Road, where Cahernane House is located is often referred to as ‘The gateway to the Ring of Kerry’, renowned for its spectacular scenery and ancient history.

Built in 1877, Cahernane House Hotel has been extensively renovated by the owners, PREM Group who have spent over €7.8 million on an ambitious renewal programme. There are 12 grand bedrooms in the original Manor House, 28 in the Garden Wing and the Coach House, once home to the horses and carriages of the Herbert family who built the house is now the setting for 8 new luxurious bedrooms. The Coach House Bedrooms have all been decorated in vibrant colours and the soft furnishings and wallpapers have been inspired by the flora of Kerry and its famous wildflowers.

Cahernane House Hotel is well known for its fantastic food which is created by the Executive Chef Eric Kavanagh and his team. The Cellar Bar serves casual food daily while fine dining is offered in the Herbert Restaurant.

The 4-star Cahernane House Hotel was originally built in 1877 as a family residence for Henry Herbert at a cost of £5,992. The original plans were to build a mansion three times the size of what it is presently, but the next generation of the Herbert family fell on hard times and let the property out as a hotel. As a result, the property feels and looks more like a grand, country, private residence rather than a hotel.

Located just outside the centre of the thriving town of Killarney, the 48-bedroom Cahernane House Hotel is still far enough away from the hustle and bustle of Kerry’s major urban centre to offer a secluded and tranquil getaway. It is located on 6.4 acres of verdant grounds and overlooks the stunning backdrop of the Killarney Lakes and Killarney National Park.

The house itself is reminiscent of times gone by and the charm in which it was built upon in the 1800s has never been lost despite the changeover of owner’s numerous times throughout its history. There are five main rooms on the ground floor of the property; the Pembroke Suite, the Herbert Restaurant, Drawing Room, Library and Reception. Each of these rooms contain historical artefacts and original antiques including items such as the Herbert Family Crest which is depicted above the front door of the hotel.

Upon entry visitors will notice a stunning Killarney Davenport desk which was built circa 1880 and carries pictures of nearby Glena Cottage, Muckross Abbey, Ross Castle, the Old Weir Bridge and the Bricin Bridge. A Queen Anne fireplace that was originally part of the Herbert’s Queen Anne style house is located in the reception and was originally built circa 1750, the original fireplace is still in working order and is lit daily. Imposing bronze statues are located within the reception, and these were originally brought to Cahernane House Hotel by Vincent and Min Albericci who bought the house in 1940.

There are 12 rooms located in the original manor house and each are packed with individual charm and character showcasing period features such as sash windows and high ceilings with elaborate stucco work. All rooms in the original house are named after people and places connected with the house, such as James Fuller, the architect, or Patricia Newling, an owner with an interesting past in the 1950s.

The Garden Wing of Cahernane House was constructed in the 1960’s and has since been completely refurbished. It incorporates 28 beautiful rooms, decorated and styled in keeping with country manor traditions.

In the summer of 2019, 8 additional rooms were created in what was once the old Coach House.  These glorious rooms are located in a separate building away from the Manor House and offer a peaceful retreat for those wishing to experience the highest levels of luxury in a quiet and peaceful space.

The Herbert Restaurant is the main Dining Rooms in the Cahernane House Hotel and seats up to 80 people. The fine dining cuisine is prepared by the Executive Head Chef Eric Kavanagh using locally sourced produce. Eric brings extensive experience from a career that includes award winning establishments such as Longueville House in Mallow and Sheen Falls in Kenmare. Cahernane House Hotel holds 2 AA Rosettes for its main restaurant.

The house is adjacent to Killarney National Park, Ireland’s largest national park, which is surrounded by mountains and lakes, and inhabited by natural wildlife. There are also numerous historical buildings in the park such as Muckross Abbey – a 15th century monastery – and Muckross House, a building that is intertwined with the history of Cahernane House due to the Herbert family.

Horse riding treks and fishing activities that take place on the grounds of Killarney National Park can be arranged by the hospitality team and there are also a wide range of splendid golf courses in the region which Cahernane House have links to.

Cahernane House Hotel has changed hands on multiple occasions in the last 115 years, beginning with the leasing of the hotel for almost 40 years from 1902. It was sold for the first time in 1940 to Vincent Albericci, and the property passed through the hands of another five owners before it was purchased by PREM Group in 2016.