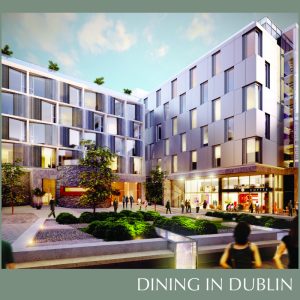 €100 million investment underway on the site of Radisson Blu Royal Hotel, Dublin, doubling its size and bringing footfall of half a million guests through the hotel

A very significant investment and extension is taking place at the Radisson Blu Royal Hotel, Dublin, with an extensive refurbishment, a new eight-storey extension and development of the new Dublin Royal Convention Centre, an attractive new venue that will host up to 800 delegates in the main plenary room. That final phase of the development also includes the creation of Le Pole Square, linking Chancery Lane to Ship Street and connecting the iconic Dublin Castle to St. Patrick’s Cathedral and Christchurch Cathedral. Le Pole Square will also have a landscaped heritage site, gallery, café and direct access to the hotel’s new spa and gym.

The existing busy 150-bedroom hotel will now have an additional 84 spacious new bedrooms, doubling its existing footprint, including an impressive new two-bedroom Presidential Suite with outdoor and living areas, with an open fire-pit and hot tub overlooking Dublin Castle. Velvaera Spa will comprise of three floors, offering six treatment rooms and a dedicated medi area. The Spa will have a relaxation area and thermal suite with a hydrotherapy pool, sauna and steam room.

The stylish Radisson Blu Royal Hotel, Dublin, first opened its doors at the crossroads of Golden Lane and Chancery Lane adjacent to Dublin Castle in 2007, a deluxe four-star hotel with contemporary elements throughout, right in the historic heart of the city. The same team involved in the initial development Reddy A+U and Graven Images is once again charged with the design of the new extension.

Refurbishment has taken place of the entire ground floor, including the lobby area and both the restaurant and bar. The newly opened Chancery Grill restaurant and the Dyflin Bar have had a lavish refit with the addition of a new asador grill to the restaurant. The main hotel banqueting suite, the elegantly renovated Goldsmiths Hall, has a fresh new theme, carried through into the 1st floor mezzanine and dedicated meeting area. With meetings and events playing an important role in the hotel, the Sky Suite will also undergo an impressive expansion. A unique venue on the 7th floor, with a private bar and wraparound balconies, based on a combination of client feedback and demand, the venue will re-open with a capacity of up to 220 guests, extending its indoor and outdoor areas.

With the new investment delivering an increase in the hotel’s bedroom capacity  from 150 to 234 bedrooms, the hotel will be in a strong position to target larger residential conferences for both the hotel and convention centre facilities, as well as responding to the demand for more bedrooms for leisure guests into the city. The predicted footfall through the hotel in 2022 is estimated to be over 500,000 guests and visitors.

“Over a decade since our opening and believing so much in this part of the capital, it is a great news story to have our fully Irish-owned and Irish-operated hotel invest further in the area and in our local community, who have supported us since we opened.,” says the Radisson Blu Royal Hotel, Dublin’s General Manager, Madeline Riley. “Our new development is happening against a backdrop of great dynamism and energy in the area, with the growing success of this part of the city — stretching from what is possibly Ireland’s most significant historical building, Dublin Castle, to the wealth of exciting new bars, restaurants, coffee shops and design-focused businesses along the axis of George’s Street and its tributaries all the way to the Royal Canal.

Our current and future developments will also mean more local employment. Along with our investment in bricks and mortar, this reinforces the Radisson Blu Royal Hotel, Dublin’s long-term commitment to this vibrant part of the city. We are also delighted to expand our presence in the deeply historic heart of Dublin and look forward to telling some of the fascinating stories we have unearthed from the past while we are continuing to create an exciting new chapter in the story of this hotel.”