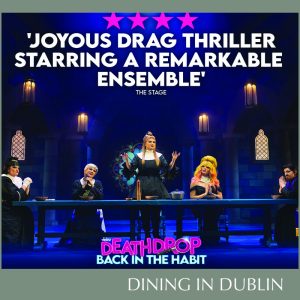 Following three sold-out West End runs and a smash hit Ireland and UK tour, Death Drop is back! The drag murder mystery sensation is returning with a brand-new show: Death Drop: Back In The Habit visiting Dublin’s Gaiety Theatre from 31 January to 4 February 2023. This laugh a minute show will feature some amazing casting: RuPaul Drag Race UK and Drag Race Vs The World star Cheryl Hole, together with Drag King LoUis CYfer and a full drag supporting cast.

A gaggle of fierce Nuns are confined to their Convent. But their peace and tranquillity is shattered by a serial slayer slashing their way through the sisters. With the help of an unexpected visitor from the Vatican, can Mother Superior and the rag-tag Sisters of St Babs save their convent, save souls, and save themselves?

The laughs keep coming in this nun-missable new murder mystery and is the heavenly dose of fun we’ve all been longing to find.

Touring across Ireland and the UK from this autumn, the new production – written by Rob Evans and directed once again by Jesse Jones – kicks off on 27 October in Bromley. This laugh a minute show will then sashay into Dartford, London, Wycombe, Cardiff, Crewe, Brighton, Blackpool, Sheffield, Leicester, Aberdeen, Nottingham, Liverpool, Glasgow, Manchester and Birmingham until 18 March 2023, with further venues to be announced.

Cheryl Hole said: “I’m so beyond excited and honoured to be part of the new cast of Death Drop and bring the show to Dublin. After seeing so many of my talented friends in the different renditions of the show, I can’t wait to step into the shoes of my peers and show everyone that I’m far from mediocre.”

LoUis CYfer said: “It’s my absolute pleasure to rejoin the cast of Death Drop and once again be the Nasty Nick of the cast … there’s no better feeling than knowing that this year, I’ll have my pick of who I want to pull my Xmas cracker with ….”

RuPaul’s Drag Race UK returns for it’s fourth season on BBC Three which starts on Thursday 22 September, the show is hitting bigger viewing figures than ever before, as BBC Three has moved back to terrestrial TV. The popularity of the art of drag has entered the mainstream and with a new production of Death Drop, drag is here to stay for all audiences in both the drag and theatre world.