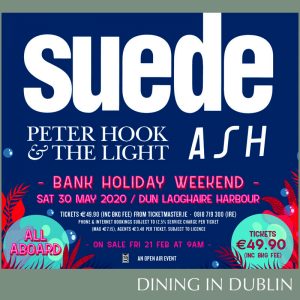 SUPERGRASS, ECHO AND THE BUNNYMEN, FUN LOVIN’ CRIMINALS – SUNDAY 31 MAY 2020

THE LAST EVER TOUR FROM TOOTS AND THE MAYTALS, THE SELECTER, LEE ‘SCRATCH’ PERRY – MONDAY 1 JUNE 2020

TICKETS GO ON SALE FRIDAY 21 FEBRUARY AT 9AM

All aboard! 3 summer concerts have been announced for Dun Laoghaire Harbour on the June Bank Holiday Weekend. Subject to licence.

All aboard presents headliners Suede with special guests Peter Hook and The Light and Ash on Saturday 30 May 2020. Supergrass will headline on Sunday 31 May with special guests Echo and the Bunnymen and Fun Lovin’ Criminals. On Bank Holiday Monday 1 June, The Last Ever Tour From Toots and the Maytals has been confirmed for Dun Laoghaire Harbour with special guests with The Selector and Lee ‘Scratch’ Perry, Droop Lion and Captain Accident. Tickets go on sale Friday 21 February at 9am from Ticketmaster. Strictly over 18s.

– On Saturday 30 May:  One of the most groundbreaking bands of the 90’s, Suede are set to return to Dublin off the back of their 8th studio album ‘The Blue Hour – the final part of the triptych of albums recorded by the band since they reformed with Bloodsports (2013) and Night Thoughts (2016). Currently touring their classic album ‘Coming Up’, the legendary britpop act established themselves as one of the UK’s biggest and most important rock bands in the early nineties with their debut album ‘Suede’,  followed by ‘Dog Man Star’, ‘Coming Up’, ‘Head Music’ and ‘A New Morning’ and a catalogue of hit singles including ‘Animal Nitrate’, ‘The Beautiful Ones’, ‘Trash’, ‘She’s In Fashion’ and ”The Wild Ones’.

Joining Suede are Peter Hook and The Light. The English rock band is fronted by Peter Hook, former bassist and co-founder for Joy Division and New Order. Hook and company have been touring for eight years and performing songs from his previous bands. Live favourites Ash, who are celebrating a career spanning 25 years including two number one albums and top 10 singles, are sure to deliver a jam-packed performance filled with hits including ‘Girl From Mars’, ‘Burn Baby Burn’, ‘Shining Light,  ‘A Life Less Ordinary’ and ‘Candy’ for their fans. Ash release Best Of Teenage Wildlife: 25 Years of Ash on 14th February 2020.

– On  Sunday 31 May 2020, Supergrass, who kick off the first of their 3 sold out Irish dates tonight as part of their 25th anniversary tour, have announced their return to Dublin this summer for All Aboard. Fans can expect a mesmerizing Greatest Hits set, from their chart topping career including ‘Richard III’, ‘Moving’, ‘Alright’, ‘Caught By The Fuzz’ and more. The Brit,Q,NME and Ivor Novello-winning outfit have released 6 acclaimed studio albums – their Mercury-nominated No.1 debut album ‘I Should Coco’, ‘In It For The Money’, ‘Supergrass’, ‘Life On Other Planets’, ‘Road To Rouen’, ‘Diamond Hoo Ha’ as well as top 5 best of, Supergrass Is 10. Their career spanning Best-of package ‘Supergrass: The Strange Ones 1994 – 2008’ is out now.

Joining Supergrass are new wave, post-punk legends Echo and the Bunnymen who have released a catalogue of influential, ground-breaking album including ‘Porcupine’, ‘Ocean Rain’ and their latest release ‘The Stars, The Oceans & The Moon’ in 2018. Multi platinum New York City trio Fun Lovin’ Criminals are celebrating the 20th anniversary of their debut album ‘Come Find Yourself’, which featured massive single Scooby Snacks, with sold out tours latest release “Another Mimosa”.

– On Monday 1 June 2020, The Last Ever Tour From Toots and the Maytals, has been announced for Dun Laoghaire Harbour. One of the true architects of reggae, Toots and the Maytals, brought the reggae sound to the masses with some of the biggest and pioneering hits in reggae history such as ‘Do The Reggay’ (the 1968 single is credited as the first song ever to feature the word ‘reggae’ and giving the genre its name), ‘Pressure Drop’, ‘54-46 (That’s My Number)’, ‘Sweet and Dandy’, ‘Monkey Man’, ‘Funky Kingston’ and ‘Reggae Got Soul’. A five time Grammy nominee, Toots and The Maytals won the 2005 Grammy Award for Best Reggae album with “True Love” with all-star guests on the 2004 album ranging from legends like Keith Richards, Eric Clapton, and Bonnie Raitt to No Doubt, the Roots, and Phish’s Trey Anastasio.

Toots introduces Droop Lion and Captain Accident plus special guests with The Selector, Lee Scratch Perry. Legendary ska-punk band, The Selecter, with Pauline Black and Arthur ‘Gaps’ Hendrickson, have been celebrating their 40th anniversary and four decades of 2-Tone on tour across the US and Europe ahead of their Dublin date. Their new album ‘Daylight’ is out now. Regarded with awe throughout the music world Lee “Scratch” Perry holds status as one of the most enduring and original reggae producers and artists of all time. From his early days in Kingston Jamaica through to his production of some Wailers classics and lots more, Perry’s innovative style marks him out as one of Reggaes true originals!

Tickets go on sale Friday 21 February at 9am from Ticketmaster outlets nationwide and www.ticketmaster.ie/

Monday 1 June 2020 -The Last Ever Tour from Toots and the Maytals, The Selector and Lee Scratch Perry – Early bird tickets €39.50 including booking fee go on sale 21 February 2020