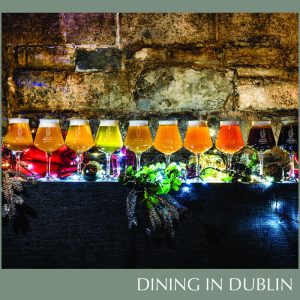 Christmas has officially arrived at Urban Brewing in the Dublin Docklands, with the unveiling of their 12 Beers of Christmas.

Each week, in the run up to Christmas Urban Brewing will be putting a spotlight on two beers including new limited edition festive brews in their 12 Beers of Christmas.

The 12 Beers of Christmas will also feature a host of firm favourites including; Urban Brewing White Lager, soft and dry for easy drinking, Urban Brewing Red IPA with a light malt profile and moderate hop character and Urban Brewing Kveik IPA  that has a residual sweetness, is medium to full bodied with herbaceous notes.

Downstairs in Stack A Restaurant Head Chef Dan Keane has a treat in store with his Christmas Menus and has teamed up dishes that compliment the brews such as Haunch of Glenmalure Venison, Roast Root Vegetable, Pickled Girolles and Bitter Chocolate Jus  which is recommended to be paired with the Urban Brewing Bierre De Noel;  or how about Fermented Beetroot, Blackberry, Toasted Hazelnut and Seaweed Oil that compliments the Urban Brewing Red IPA, round it off with Caramelised White Chocolate Delice, Brownie Crumb, Orange and Tonka Gelato that works well alongside the Urban Brewing Szechuan Stout, which is spicy, rich and aromatic.

Urban Brewing was established in 2017 by O’Hara’s Brewery, one of the pioneers of Irish craft brewing and now one of the largest craft breweries in Ireland, and encompasses a fully-functional microbrewery, two bars and Stack A Restaurant which is located within the building’s underground vaults.

The 12 Beers of Christmas and availability

Some of the O’Hara’s range that may be offered as alternatives throughout the campaign:

*Dates subject to change depending on brewing timelines