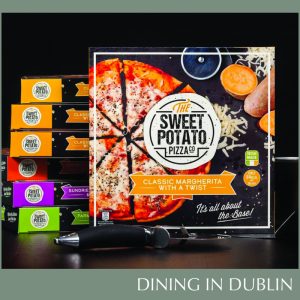 Slow release of energy from sweet potato base!

We all want to eat healthier every New Year. When it gets into the second week of frugal living who doesn’t start to crave pizza?

Now now its inventor, Blanchardstown-based Craig Grattan, has introduced the Margherita to his range of what has now become a suite of four epicurean flavours. It’s the lowest calories Sweet Potato Pizza yet, at just 670 cals for the entire pizza. Most Margherita pizza slices clock in at about 200 calories – while The Sweet Potato Pizza Co.’s new Margherita averages 82 cals per slice!

Because the dough is made with sweet potato it’s a slower release of energy that keeps you fuller for longer.

It also goes towards 1 of your 5-a-day; a subtle way of providing vegetables – one of children’s favourite meals.

And it’s the perfect ‘cheat meal’ without adding any guilt! RRP €5

About Craig Grattan, the Inventor of The Sweet Potato Pizza Co.​

In his early twenties Dubliner Craig Grattan, owner of The Sweet Potato Pizza Company, made a personal lifestyle change. Craig made the decision to become more physically active and more health conscious, especially when it came to the foods in his daily diet. Throughout the years of working out and eating healthy, Craig became more adventurous in his meal planning. One weekend he experimented and created a delicious sweet potato pizza base as a healthier substitute for a ‘cheat’ meal.

The Sweet Potato Range is now available from:

Supervalu will be promoting the entire Sweet Potato Pizza Range in selected stores from the 13th of Jan to the 7th February. Two topped pizzas for €10 and two Margheritas for €8.

For more information go to: sweetpotatopizza.ie