THE DORIS DAY SHOW: AN EXHIBITION DEDICATED TO THE LIFE AND WORKS OF HOLLYWOOD ICON, DORIS DAY

THE DORIS DAY SHOW: AN EXHIBITION DEDICATED TO THE LIFE AND WORKS OF HOLLYWOOD ICON, DORIS DAY 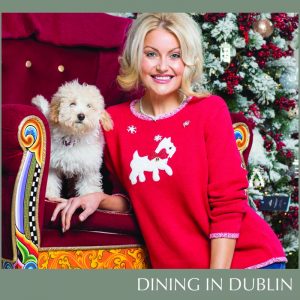 JEWELLERY AND GARMENT HIGHLIGHTS FROM THE WARDROBE OF DORIS DAY GO ON VIEW AT THE MUSEUM OF STYLE ICONS AT NEWBRIDGE SILVERWARE, NEWBRIDGE, CO. KILDARE

Newbridge Silverware, together with Julien’s Auctions and The Doris Day Animal Foundation, has opened a new exhibition featuring a rare collection of garments, jewellery and accessories from the wardrobe of movie icon, Doris Day at the Museum of Style Icons, Newbridge, Co. Kildare (Ireland). The free to enter exhibition entitled, ‘The Doris Day Show’ opened on the 26th of November and runs until 3rd February, 2020.  The property will be auctioned by Julien’s Auctions in Los Angeles on 4th – 5th April 2020, the day after what would have been the stars 98th birthday.  Doris Day was famed for her love of animals and all proceeds will go to her charity ‘The Doris Day Animal Foundation’ which the singer and actress founded in 1978. For more information www.ddaf.org

This exhibition is in fact the only European showcase of the Hollywood icon’s personal garments, jewellery, awards and film costumes and offers viewers a rare opportunity to see a piece of film history. Included are garments and jewellery that the star wore to the Golden Globes and on her TV show, the world famous ‘The Doris Day Show’.  There are also several garments and pieces of jewellery with dog motifs. The star famously loved dogs and often wore clothing which reflected her passion for animals.  The collection also features some stunning gowns, cocktail dresses and several capes which Day liked to wear in both her film work as well as in her personal life.

One of the most important garments which will be on display at the Museum of Style Icons is Doris Day’s formal white trouser suit ensemble which she wore when she received a lifetime achievement award, at the 1989 Golden Globes. The Cecil B. DeMille Award is an honorary Golden Globe Award bestowed by the Hollywood Foreign Press Association (HFPA) for “outstanding contributions to the world of entertainment”.  This two piece Valentino outfit includes an ivory, coloured silk blouse with a high collar and long sleeves. It has ornate ruffles on the front and the sleeves and lace floral adornments on the neck and cuffs. The star paired them with a pair of matching trousers in the same colour when she attended the glitzy awards ceremony at the Beverly Hilton Hotel in Beverly Hills, California.  Doris Day was photographed wearing this outfit with fellow Golden Globe winner Clint Eastwood. That same evening Eastwood picked up a gong for the movie ‘Bird’ which he produced and directed.

Several garments bearing dog motifs and imagery will be shown in the exhibition including a 1980’s beige silk blouse with patterns of various dogs and their breed names in cursive text throughout. There is also a cute dog shirt, a button up dog patterned shirt and even a Christmas jumper with a picture of white West Highland Terrier. Even her jewellery bore canine motifs – a 14k gold Poodle charm bracelet will also be on show. The bracelet has 11 gold charms which feature various dog breeds including three Poodles and a Schnauzer.  It has five pink sapphires and a diamond and is inscribed ‘All Our Love Terry & Dad’, (her son and husband).

Doris Day was a renowned style icon known for her sunny disposition and zest for life and that was reflected in her clothes which were usually in bright colours and heavily printed. She famously said, “I want to wear beautiful clothes and look pretty. I want to smile, and I want to make people laugh. And that’s all I want. I like it. I like being happy. I want to make others happy.”

Newbridge Silverware and the Museum of Style Icons also own a two-piece Doris Day garment which is on permanent display.  It is a costume which Day wore in the 1951 movie ‘On Moonlight Bay’ in which, the star played the part of ‘Marjorie Winfield’.  Designed by costume designer, Marjorie Best, this teal coloured period skirt and blouse will also be shown as part of the new exhibition but will not be sold as part of the auction. It is a beautiful garment consisting of an artisan blue wool pleated long skirt, topped by a sheer silk-tulle blouse with integral satin bustier.

Doris Day was the top box office draw of the 20th century and hit number one four times in the 1960’s. Born in Cincinnati, Ohio as Doris Mary Anne Kappelhoff on April 3, 1922, Day began her career as a dancer then later as a singer.  She went on the big band circuit singing with Les Brown and His Band of Renown and recorded No. 1 hits, ‘My Dreams are Getting Better All the Time’ and ‘Sentimental Journey’.

Soon after embarking on a singing solo career, Hollywood came calling and she got her first film role in ‘Romance on the High Seas’ (Warner Bros., 1948) which produced her No. 2 hit as a soloist, ‘It’s Magic’. Shortly after, her duet with Buddy Clark ‘Someone Like You’ became her first No. 1 as a solo artist which was featured in the 1949 film ‘My Dream is Yours’. Day had 30 Top-20 singles from 1948 to the late 1950s, including the No. 1 hits ‘Love Somebody’ and ‘A Guy Is a Guy,’ and recorded over 30 albums.

She starred in several hit films for Warner Brothers which displayed her singing and comedic talents, ‘Tea for Two’ (1958), ‘On Moonlight Bay’ (1951), ‘By the Light of the Silvery Moon’ (1953), ‘Young at Heart’ (1954) opposite Frank Sinatra, ‘Teacher’s Pet’ (1958) opposite Clark Gable as well as the western themed musical, ‘Calamity Jane’ (1953).  The song ‘Secret Love’ recorded for ‘Calamity Jane’ won the Academy Award for Best Original Song that year and became her fourth No. 1 hit single.

During the decade, Day had her own radio program ‘The Doris Day Show’ and albums from six of her movie musicals charted in the Top 10, three of them at No. 1. In the latter half of the 1950s, Day’s success on the silver screen and music charts reached even greater heights as she took on more dramatic acting roles as singer Ruth Etting opposite James Cagney in the film ‘Love Me or Leave Me’ (MGM 1955) which Day considered to be her best film performance and which the film’s soundtrack went to No. 1.

The following year, Day would star in her breakthrough dramatic role as Josephine Conway McKenna in Alfred Hitchcock’s classic thriller ‘The Man Who Knew Too Much’ opposite James Stewart and became her tenth film to be in the Top 10 at the box office. In the film, she sang two songs ‘We’ll Love Again’ and what would become the song most synonymous with Day, ‘Que Será, Será’ (Whatever Will Be, Will Be), which won the Academy Award for Best Original Song.

She would return to her musical comedy roots in the 1957 film ‘The Pajama Game’ with John Raitt and would achieve even greater box office success in a slew of romantic comedies from 1959 to 1968, beginning with her film ‘Pillow Talk’ starring opposite Rock Hudson with Tony Randall. The film won an Oscar for Best Screenplay and an Oscar nomination for Day for Best Actress and from then on, Day became an even bigger household name with her roles playing working women in post war America.

Day and Hudson went on to become one of Hollywood’s most iconic film duos of all time and would star together in two other hit romantic comedies, ‘Lover Come Back’ (Universal Pictures, 1961) and ‘Send Me No Flowers’ (Universal Pictures, 1964). Their on-screen chemistry continued off screen in their lifelong friendship and the incredible bond they shared throughout their lives and up until Hudson’s death from AIDS in 1985. Day helped open the door to tolerance and understanding of the disease by publicly demonstrating her support and empathy for Hudson who became the first celebrity to announce that he had AIDS.

From 1968 to 1973, Doris Day starred in her own successful television show on CBS, ‘The Doris Day Show’ and as well as two television specials, ‘The Doris Mary Anne Kappelhoff Special’ (1971) and ‘Doris Day Today’ (1975). She devoted her life to her passion and advocacy of animal rights and welfare activism and helped found the ‘Actors and Others for Animals’, an organisation that rescues stray and mistreated animals and later founded ‘The Doris Day Animal Foundation’ and the Washington-based ‘Doris Day Animal League’. After her retirement from acting, Day lived in Carmel-by-the-Sea in California where she also co-owned a hotel called the Cypress Inn, considered one of the most pet friendly hotels in the U.S.

Day received many distinguished honours including the Presidential Medal of Freedom in 2004 and the Los Angeles Film Critics Association’s Career Achievement Award in 2012. She recorded more than 650 songs from 1947 to 1967 and her songs ‘Sentimental Journey’ and ‘Que Será, Será (Whatever Will Be, Will Be’ were both inducted into the Grammy Hall of Fame. Sadly, Doris Day passed away just this year, on May 13, 2019 at the age of 97.

William Doyle, CEO of Newbridge Silverware and the Museum of Style Icons said, “Doris Day was a true Hollywood icon, her talents, style and beauty lives on through her many films and songs.  She had a real affinity with Christmas and had a very famous Christmas album where she sang some of the festive seasons most charming and memorable Christmas songs. We at the Museum of Style Icons are delighted to be the only European venue for this exhibition and feel that people will really enjoy this fun exhibition in the lead up to Christmas. It shows off Doris Day’s happy disposition, her love of animals and her own uniquely personal style which was both glamourous and fanciful.”

The collection will remain on public exhibition at the Museum of Style Icons, Newbridge Silverware, Newbridge, Co. Kildare (Ireland) from the 26th of November 2019 to the 3rd of February 2020. Entry to the Museum of Style Icons is free.  ‘The Property From The Estate Of Doris Day’ goes for auction through Julien’s Auctions on Saturday 4th and Sunday 5th of April 2020. For more information on the auction please email – info@juliensauctions.com