The countdown is on to the 2019 World Steak Challenge

The countdown is on to the 2019 World Steak Challenge 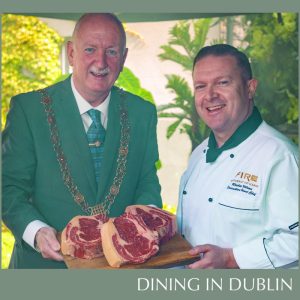 The Lord Mayor of Dublin Nial Ring today (May 13) confirmed that the closing date for the 2019 World Steak Challenge, which is taking place for the first time in Eire, has been extended by a fortnight to May 28.

Hundreds of beef producing companies across the world are expected to compete in this year’s challenge which is organised by Global Meat News to find the World’s Best Steak.

The competition has moved out of London for the first time to take place in Dublin following the confirmation of Bord Bia, the Irish Food Board, as official host partner for the 2019 World Steak Challenge.

To accommodate growing numbers of entries, the robust expert and consumer judging process has been extended over two days and will be hosted by the award-winning FIRE restaurant and lounge. The awards will be announced at a reception at the Mansion House.

At a media breakfast (Monday, May 13) to confirm plans for the 2019 event, The Lord Mayor of Dublin Nial Ring said: “I’m delighted to welcome the 2019 World Steak Challenge to Dublin.  Beef production is one of Ireland’s greatest farming strengths and we are the fifth largest exporter in the world, making us an obvious choice to be a host nation.  As a beef lover, I am particularly interested in this challenge and it is great to have Dublin hosting this event.

“Our own country’s performance in this challenge continues to go from strength to strength. The question is who can beat Finland, last year’s supreme champion?”

Global Meat News deputy editor Aidan Fortune confirmed that this year’s event was shaping up to be the biggest yet.

“Every year we’re astonished by the level of engagement from judges, entrants and winners. It’s something the international beef industry has really got behind and the number of entries has grown year on year. The very fact we’re taking it on the road to Dublin this year shows how big it has become and how large the appetite for the event is.”

More than 30 experts have agreed to adjudicate in this year’s event which is a platform for to benchmark the quality of beef production against international competitors.

The panel draws together beef producers, butchers, restaurateurs and chefs from around the world. They will convene on July 9 and July 10.

Chair of this year’s judges and a previous judge for the London competitions, is Ireland’s Richie Wilson, Executive Chef of FIRE and SOLE.  Previous chairs have come from Northern Ireland, the Netherlands and South Africa.

The awards ceremony itself is on July 10 in the Round Room of the Mansion House, the official residence of the Lord Mayor.

Gold, Silver and Bronze medals will be awarded to rib eye, fillet steak and sirloins. But from the winners in each of those categories, only one steak will achieve the prestigious status of World’s Best Steak 2019.

The 2018 champion was a grass-fed Ayrshire produced by JN Meat International of Denmark. The steak, which was reared by Atria Finland in Finland, won Best Grass Fed and Best Sirloin medals in the annual challenge.

In previous years, the supreme championship title has gone to ABP Poland, the Polish division of ABP Food Group (2017) and the Australian cattle ranch Jack’s Creek, entered by Albers GMBH which has won twice (2016 and 2015).

The closing date for this year’s competition is now Tuesday, May 28.

The World Steak Challenge is presented by Global Meat News, which is owned by William Reed Business Media, the company behind the acclaimed World’s 50 Best Restaurants awards and The International Wine Challenge. The event is kindly supplied by Synergy Grill Technology.