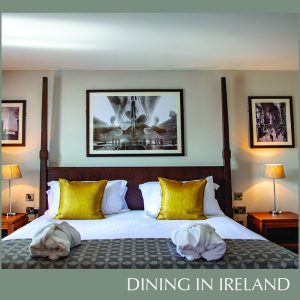 With Christmas fast approaching, lots of people will now be finalising the details of how to spend this festive season. Perhaps the usual routine is getting tired and the thoughts of cooking a turkey are filling you with dread- could be the year you try something different?

Redcastle Hotel, situated on the shores of Lough Foyle on the Inishowen Peninsula, County Donegal, might just be the break you need. Now in its second season of opening for Christmas, Redcastle Hotel offers a relaxing festive atmosphere and will promise to deliver you an unforgettable Yuletide.

Starting from €429 pps for two nights, which spans Christmas Eve to St Stephen’s Day, the packages on offer are family friendly, with no charge for children under four years old.  Redcastle Hotel promises to keep everyone entertained with activities such as a Santa visit, live choirs, Christmas movies in the hotel’s cinema, mince pies and hot drinks receptions, live entertainment, and family magic shows.

On Christmas Day guests will sit down to a delicious buffet lunch in the Ocean Suite, and later on that evening, there will be a Christmas night buffet supper followed by live entertainment in the Captain’s Bar.

For those wishing to truly unwind, Redcastle Hotel has a fabulous spa and for the keen golfers, the hotel’s golf course is situated a stone’s throw from the hotel.

Make this New Year’s Eve memorable with a luxurious trip to Redcastle Hotel, where guests will experience the hotel’s stunning cuisine from The Edge, the hotel’s AA Rosette restaurant. Head Chef Gordon Smyth will be treating residents to a sumptuous six course meal on December 31st, which will be followed by a spectacular fireworks display overlooking Lough Foyle as the clock strikes midnight.

Rates start at €240.00 pps for two nights, and include breakfast on both mornings, and the six course dinner on New Year’s Eve, as well as live entertainment in the Captain’s Bar nightly.

See https://www.redcastlehoteldonegal.com/ for more information on the festive packages.

The Redcastle Oceanfront Golf Hotel and Spa is a deluxe 4-star resort on the shores of Lough Foyle in Inishowen, Co. Donegal – one of the most beautiful peninsulas in Ireland. The secluded hotel is set amongst mature parkland with its own private 9-hole golf course, award winning restaurant and fantastic spa and leisure facilities. Situated just 30 minutes’ drive from City of Derry Airport and less than two hours’ drive from Belfast International Airport; the hotel is within easy reach of travellers from across the world.

The hotel has an unrivalled Donegal location, in the North West of Ireland, situated on the shores of Lough Foyle; a short five-minute drive along the coast is the pretty town of Moville with Derry City a short fifteen / twenty-minute drive away