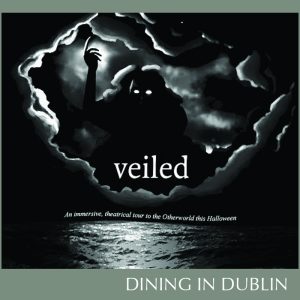 Following the year on year sell out success of Darkland, twisted tales from the darker side of Ireland, National Leprechaun Museum have announced a new immersive Samhain experience – veiled.

veiled will take you on an immersive, site specific journey through the Otherworld in Old Mary’s Abbey this Hallowe’en. Guided by a spirit older than the city you will be taken into the darkest Irish tales, the ones long hidden from sight. Something is rotting, it has been festering for a long time.

veiled opens at St. Mary’s Abbey on Capel Street on 24th October with nightly shows running until 2nd November at 19:00 & 20:15. Tickets priced €15 are on sale now from  www.leprechaunmuseum.ie. Book early to avoid disappointment as veiled is a site-specific performance with a strictly limited capacity.

“The veil is thinning, its membrane tears. A wound in time, thrashing through they come seething, festering spirits. They have arrived.”

veiled is directed by Alice Bellamy with an ensemble cast.

About the production setting:

veiled is an immersive and unseated production. Each performance requires you to move through the narrative and settings. Due to the historic nature of the site, veiled regrettably has limited accessibility, and is not wheelchair accessible.

Meeting at the National Leprechaun Museum no later than 10 minutes before the tour time.

About the National Leprechaun Museum:

The National Leprechaun Museum is the first museum dedicated to Irish mythology and folklore. Founded in 2010, this is a fascinating, magical world full of folklore, myth, and legend. Using the power of stories, visitors from near and far explore the unique imagination of Ireland. Stories have been told in Ireland for a very long time, and the museum is a place to share these stories. At the National Leprechaun Museum, storytellers have tales to delight, stories to shock and legends to inspire. Based in the heart of Dublin, the museum takes you deep into Irish culture to discover what really lies behind the well-known tales of Ireland. Whatever you imagine, there’s a story for it.