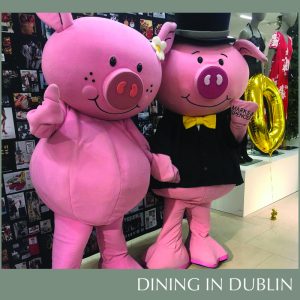 M&S marked the day with a series of in-store celebrations, including an archive installation on the ground floor showcasing a snapshot of the history of the brand in Ireland. Customers could see examples of the uniforms staff would have been wearing, as well as womenswear from the 1970s/80s.

Yesterday morning, the first customer through the doors was presented with a bottle of Champagne and flowers. Following this, the next 100 customers to visit the store received Golden Tickets, which entitled them to M&S Gift Cards of varying amounts.  Customers were also surprised with random acts of kindness throughout the day.

To mark the milestone year, the retailer introduced a limited-edition Irish pack of its iconic Percy Pig confectionery.  Percy & Penny made a surprise guest appearance to say hi! They were on-hand throughout the day meeting customers and handing out the recently launched Percy Pig advent calendar.

In a nod to the recently launched M&S Christmas ad, 40 dancers took to the street outside the store for a dance performance to House of Pain’s “Jump Around”.