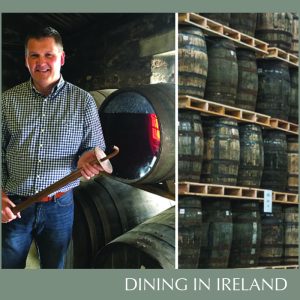 The Dingle Distillery, one of Ireland’s leading, family owned independent distilleries has appointed Graham Coull as its new Master Distiller to continue the distillery’s production of award winning spirits.

Following a lengthy process that saw applicants from across Europe and as far as Australia apply for the highly sought after position of Master Distiller at the award winning distillery, Graham Coull will commence his role in at the Dingle Distillery from October 2019.

Having started his foray into the drinks industry training as a brewer at Webster’s Brewery in Halifax, in 1994 Coull began working in the whisky industry as bottling manager at William Grant & Sons before realizing his passion for distillation, becoming Distillation Manager for Glenfiddich, Balvenie and Kinivie Distilleries. He leaves his most recent role as Distillery Manager and Master Distiller at Glen Moray where he held a 14-year tenure, during which time he managed the expansion of the distillery and developed its range of whiskies. Arriving at the Dingle Distillery will mark his 25th anniversary working within the whisky industry.

Commenting on his new role “Becoming the Distillery Manager and Master Distiller at The Dingle Distillery is an ideal opportunity for me to continue my passion for creating whiskies. I’m extremely impressed with the quality of the maturing spirit at Dingle and welcome the challenge of distilling in Dingle’s unique maturation conditions to craft the next small batch releases of Irish whiskey. I’m looking forward to really exploring the similarities and differences between Scotch and Irish whiskey, comparing and contrasting the different styles and bringing my experience to develop the new expressions and releases. There are definitely exciting times ahead!” Graham Coull, newly appointed Master Distiller at The Dingle Whiskey Distillery.

Elliot Hughes, Partner at The Dingle Distillery comments: “On behalf of The Dingle Distillery, I am absolutely delighted to welcome Graham. I know our ever-expanding team in Dingle are looking forward to having him on board and learning from his wealth of experience acquired from over 2 decades working with whisky. We are all eagerly anticipating the next chapter of the Distillery and working alongside Graham on the continued development of our Single Malt and Pot Still whiskies as well as our Gin and Vodka.”

The first new release Coull will oversee will be the distillery’s next small batch whiskey release, scheduled for unveil at Dublin Whiskey Live in November 2019.