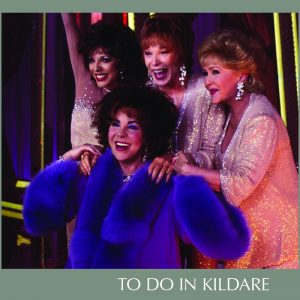 Newbridge Silverware, together with Julien’s Auctions and House of Taylor, will exhibit a rare collection of jewellery and costumes from the wardrobe of movie icon Elizabeth Taylor at the Museum of Style Icons. The exhibition entitled, ‘The Lifestyle of Elizabeth Taylor’ opens tomorrow (Tuesday, 10th of September) and runs until, October 6th, 2019. The exhibition at the Museum of Style Icons at Newbridge Silverware is in fact the only European showcase of the Hollywood icon’s most unusual jewellery pieces, garments and film costumes. Included are garments and jewellery that were the property of the star, created by designers Christian Dior, Nolan Miller, Valentino, Versace, and many more.  The collection offers visitors a rare opportunity to see the many dazzling garments and jewellery, which were once worn by Elizabeth Taylor, before they go to auction on the 6th 7th and 8th December, 2019 in Los Angeles, California, where they will be sold by Julien’s Auctions.

Elizabeth Taylor was a trailblazer from a young age, marking the start of new fashion trends, igniting screens around the world as the greatest and most beautiful classic movie star, and courageously stepping forth as a philanthropist and activist during the height of the global AIDS crisis. This is a unique opportunity to see first-hand some of the personal effects of one of the 20th Century’s most fascinating and influential people, and to be up close and personal with personal pieces from the lifestyle of such a cultural icon.

A dazzling array of Taylor’s most provocative and style statement-making jewellery is in the exhibition including a cutting edge, Thomas Sabo designed ensemble consisting of a long chain link necklace, with a sword, a motorcycle, and skull pendants in marcasite, together with a coordinating pair of dangling skull earrings.   There is also a bamboo trunk designed sterling silver cuff bracelet, marked “925 / Thailand” and a sectional gold-tone metal bracelet adorned with yellow glass and geometric-shaped rhinestones together with a matching rectangular-shaped brooch.

The collection is fascinating and not to be missed, showing Taylor’s lesser known whimsical and quite often tongue in cheek, personal style, which is a unique perspective to add to Taylor’s well-known high-octane glamour.  A multi-strand black leather choker with an attached grand piece of amber housed in a large sterling silver square setting with a large coordinating bracelet is one of the show-stopping pieces in the collection.  There is also a double strand silver-tone metal purple crystal necklace with rhinestones, and a set of ‘Elizabeth Taylor designed for Avon’ bracelet cuffs with a detailed Egyptian motif, from the successful line of costume jewellery the star sold through the company in the 1990s.

Other interesting pieces include a sterling silver and amethyst wrap-around cuff style necklace which is illegibly signed on the back with an added notation of “2/3/98 / Sterling / w/Amethyst;” and a fun bracelet made of vintage Coca-Cola bottle frosted glass.

The collection includes several pieces worn by Taylor that were symbolic of her astrological sign as a Pisces, including a pair of dangling fish earrings, adorned with multi-colored beads and rhinestones, a pounded brass choker with two fish pendants with red glass eyes and a silver-tone multi-colored rhinestones fish ring. The jewellery collection also features a pair of extra-large sterling silver round hoops worn by the star in her appearance on the “The Oprah Winfrey Show” in 1993.

One of the most important garments in the exhibition is the costume Taylor wore in her last ever film which was a Nolan Miller purple silk jacket with fox fur and matching blouse and pants. Taylor wore it in the made-for-television film “These Old Broads” (ABC Television, 2001). Other special garments include a Valentino dress and jacket in pale pink linen as well as a Valentino Couture maroon vest and pants ensemble worn in Night Watch (Avco Embassy Pictures, 1973).  A custom made multi-coloured striped pattern silk coat worn by the star in 1982 when she visited the cast of the Broadway musical, “Joseph and the Amazing Technicolor Dream Coat” in New York City is another interesting garment.

Also, on display is a yellow “Jimmie Jean Jackson” satin robe costume worn in Hammersmith is Out and Taylor’s costume from the film X, Y and Zee consisting of a suede vest and pants by Cordoba with an off-white blouse by Dior.

One of the most eccentric pieces is a Laise Adzer cotton vest and yellow harem pants worn by the star in 1991 when she went to Neverland Valley Ranch to give Michael Jackson an elephant for his birthday.

William Doyle, CEO of Newbridge Silverware and the Museum of Style Icons said, “Elizabeth Taylor is a true Hollywood icon, her style, grace and beauty lives on through her many films and through countless books and documentaries.  We, at the Museum of Style Icons have always been interested in the movie icon’s style and own several original Elizabeth Taylor garments ourselves.  When Julien’s Auctions and House of Taylor asked us would we exhibit this very interesting collection of Elizabeth Taylor affects we were of course thrilled to accept. The Museum of Style Icons will in fact be the only venue in Europe where people will see this very interesting collection, so we are very grateful to Julien’s and House of Taylor to allow us to exhibit this very important collection. We were also quite taken with how different the items are. The garments and jewellery are unexpected in that they are quite bold, and even eccentric at times. The pieces show off Elizabeth Taylor’s sense of fun, and whimsical relationship with fashion and show a side to her that many of us were not aware of.”

The collection will remain on public exhibition at the Museum of Style Icons, Newbridge Silverware, Newbridge, Co. Kildare (Ireland) from the 10th September to the 6th of October. Entry to the Museum of Style Icons is free.  ‘The Lifestyle of Elizabeth Taylor’ auction goes on sale through Julien’s Auctions on Friday 6th of December 2019. For more information on the auction please email – info@juliensauctions.com  For more on Newbridge Silverware see www.visitnewbridgesilverware.ie or call 00353 (0) 45 431301.

ABOUT THE MUSEUM OF STYLE ICONS AT NEWBRIDGE SILVERWARE

The Museum of Style Icons at the Newbridge Silverware Visitor Centre in Newbridge, Co. Kildare (Ireland) contains one of the most unique collections of fashion and cinema memorabilia in the world and welcomes over 350,000 visitors a year. The free to enter museum has several permanent exhibitions dedicated to design and style while celebrating some of the world’s most iconic personalities from the worlds of fashion, film and entertainment.  Just some of the legendary stars of film and television known worldwide whose garments, fashion and personal effects are on permanent display at the museum include Audrey Hepburn, Grace Kelly, Marilyn Monroe, Princess Diana, Elvis Presley, Elizabeth Taylor, The Beatles, Bob Dylan, Kim Kardashian and many others. It is open 7 days a week and admission is free. For more seewww.visitnewbridgesilverware.com  or call +353 (0) 45 431301.

Julien’s Auctions is the world-record breaking auction house. Collaborating with the famous and the exclusive, Julien’s Auctions produces high profile auctions in the film, music, sports and art markets. Julien’s Auctions has received international recognition for its unique and innovative auction events, which attract thousands of collectors, investors, fans and enthusiasts from around the world. Julien’s Auctions specializes in sales of iconic artifacts and notable collections including Marilyn Monroe, John Lennon, Ringo Starr, Lady Gaga, Banksy, Cher, Michael Jackson, U2, Barbra Streisand, Les Paul, Neil Young, Elvis Presley, Frank Sinatra, Jimi Hendrix, Hugh Hefner and many more. In 2016, Julien’s Auctions received its second placement in the Guinness Book of World Records for the sale of the world’s most expensive dress ever sold at auction, The Marilyn Monroe “Happy Birthday Mr. President” dress which sold for $4.8 million. Julien’s Auctions achieved placement in the Guinness Book of World Records in 2009 for the sale of Michael Jackson’s white glove, which sold for $480,000 making it the most expensive glove ever sold at auction. Based in Los Angeles, Julien’s Auctions has a global presence bringing their auctions and exhibitions to targeted destinations worldwide including London, New York, Las Vegas, Japan and China. Live auctions are presented for bidders on-site and online via live streaming video and mobile technology. For more information on Julien’s Auctions, go to www.juliensauctions.com. Connect with Julien’s Auctions at www.facebook.com/JuliensAuction or www.twitter.com/JuliensAuctions or www.instagram.com/juliens_auctions.

ABOUT HOUSE OF TAYLOR

PHOTO CREDIT  Getty/Ron Tom / Contributor of Elizabeth Taylor wearing the purple ensemble designed by Nolan Miller in “These Old Broads” (ABC) up for auction at Julien’s Auctions Dec. 6-8, 2019. Next to her is Joan Collins, Shirley MacLaine and Debbie Reynolds.