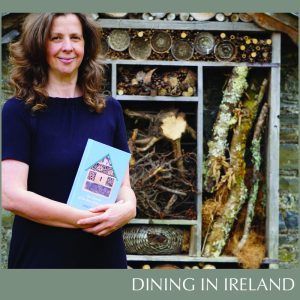 The team behind the  Immrama Festival of Travel Writing has announced its return following a 3-year hiatus due to the pandemic. The Festival will take place from June 16th to 19th in the heritage town of Lismore in County Waterford.

Famous for gathering tales of travel, and sharing stories of unusual adventures the festival programme for 2022 is celebrating travel again and the visiting speakers will share details of their travel experiences and adventures over three days at a Lismore Heritage Centre and the Golf Clubhouse in Lismore town.

One of the organisers Edward Lynch says,” We are delighted to announce the return of the Immrama Festival of Travel Writing.  The theme of the 2022 festival is ‘Big lives in small places. Roots in small towns’ and all of our speakers will share their insights of their global journies and those of others who left their small towns to go on great adventures and return with tales of life discoveries.

Opening the festival on Thursday, June 16th at Lismore Heritage Centre is a talk from journalist and the author of five books Des Ekin, who will talk about Ireland’s Pirate Trail, 30 true-life pirate stories collected from travelling around the Irish coast by land and sea.

On the evening of Friday, June 17th the best-selling author whose book, An Unsung Hero, the biography of explorer Tom Crean, opened a new chapter in Irish history and stimulated widespread interest in Ireland’s role in Polar exploration – Michael Smith will take to the stage. Michael will talk about his latest book Lost and Found – Irishman Captain Francis Crozier and the Franklin Expedition disaster.

Getting the day off to a start on Saturday, June 18th, Historian Donald Brady will make a presentation on Temple Lane – Mary Isabel Leslie (1899–1978) who was the daughter of John Herbert Leslie, Dean of Lismore (1930-34). Donald will share the story of her fascinating life and career.

At lunchtime one of the founding members of the music group De Dannan with whom he toured extensively in Europe, Canada and the US and has recorded several albums Charlie Pigott will share a talk of musical travels.

In the afternoon the theme of travel for work continues as Ralph Riegel the southern correspondent for Independent Newspapers will take to the stage. Ralph is the author of ten books – five were bestsellers including the No 1 best-seller ‘My Brother Jason’ with Gill Books which featured in TV documentaries with CBS in the US and VirginMedia in Ireland. His book ‘Commando’, was the focus of a Sky TV documentary while ‘Hidden Soldier’ inspired the RTE series, ‘Hostile Environment with actor Liam  Cunningham.

Joining Ralph for this event is Thom Breathnach who will talk about the paradox of sustainable travel and social media’s current travel trends.  Thom is an award-winning travel writer from Cork specialising in the areas of sustainable travel, slow tourism, and wildlife. A language graduate with a grá for galivanting, he began travel writing while working for a non-profit in South Africa and has been on the road since. For the last ten years, Thom has been living and travelling across the world working as a travel contributor for titles such as The Boston Globe, Men’s Journal, Men’s Health, The Irish Independent, and Cara magazine and he is the current Travel Editor The Irish Examiner. He also regularly features as a contributor to Virgin Media’s Ireland Am as well as RTÉ’s Today Show.

On Saturday evening journalist, broadcaster and barman Billy Keane will share Travel stories from within and outside the head. Billy wrote a column for the Irish independent for the 21 years. His travels with Munster defined the glory years and were full of mischief and fun. Keane has appeared on most television shows ranging from the Late Late Show on several occasions, Primetime which was screened live from his pub to 3 seasons of the Today Show with Daithi and Maura. Billy has written two novels. His latest The Ballad of Mo and G was described by Donal Ryan as  “heartbreak and comedy, tenderness and savagery meld into a beautiful, mad narrative delivered in a voice that’s completely real. I could not put it down.”  He was awarded the United States IBAM award for literature alongside late his father John B Keane in 2019.

On Sunday morning the traditional Literary Breakfast returns to Lismore Golf Club where Turtle Bunbury will talk about ‘Women of Munster – The Adventures Lola Montez, Eliza Lynch and Nellie Cashman’. Turtle is a best-selling author and historian. His recent books include The Irish Diaspora and Ireland’s Forgotten Past, described by BBC History Magazine as ‘impeccably researched.’  Turtle also presents history podcasts including Turtle Bunbury’s Global Irish and Waterways Through Time.

Following the Literary Breakfast is an exciting book launch with Molly Twomey and Grace Wells.

Molly grew up in Lismore, County Waterford, and graduated in 2019 with an MA in Creative Writing from University College Cork where she now works as a Library Assistant. She has been published in Poetry Ireland Review, Banshee, The Irish Times, Mslexia and The Stinging Fly. She has been chosen for Poetry Ireland’s Introductions series and was awarded an Arts Council Literature Bursary in 2021 and an Agility Award in 2022. She will launch Raised Among Vultures  (Gallery Press) her debut poetry collection. Poet Thomas McCarthy describes her as ‘a poet for a new Ireland, for a new post-Covid world‘

Grace Wells is an award-winning eco-poet and environmental writer. Nature, spirit-of-place and ecological concern have been large themes in her writing since the publication of her debut children’s novel ‘Gyrfalcon’ (O’Brien Press). Her soulful work inspires readers to come into stronger connection with themselves and the natural world that supports and surrounds them. Grace will launch of her third collection of poems ‘The Church of the Love of the World’, (Dedalus Press, Dublin)

The 2022 Lismore Immrama Festival will take place from June 16th to 19th. For further details and to pre-book tickets see www.Lismore Immrama.com. or call 085 8628445.