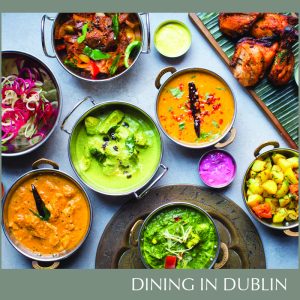 – In just three weeks over 100,000 people across the UK and Ireland voted to help whittle the longlist of restaurants down to just six finalists for each of the 18 categories

Dublin, 28th October. Food lovers in Dublin have voted in their numbers for local favourites to be selected as finalists in Deliveroo’s inaugural Restaurant Awards. The shortlist of restaurants in with a chance of victory was chosen after the first round of public voting which saw over 100,00 people across the UK and Ireland cast their vote, resulting in more than 400 hopefuls being reduced to just over 100 finalists. Four Dublin restaurants have been shortlisted for the following categories:

Deliveroo’s Restaurant Awards will put a spotlight on the best cuisine restaurants have to offer, bringing together a host of culinary talent from across the country. The public now have until Wednesday 4th November to cast their vote and give their favourite local restaurant the best chance of success, with the winners announced at Deliveroo’s virtual awards ceremony on December 7th.

This is the second year that Deliveroo has organised their own restaurant awards and they take on a special significance this year, as the awards will focus on the hard work and talent of their amazing restaurant partners who have endured an extremely tough time due to the pandemic. Due to Covid-19, the awards will be held virtually on Deliveroo’s Twitter channel but will be bigger and better than last year as the winners will have the chance to star in one of Deliveroo’s major digital campaigns.

The event will be hosted by a panel featuring broadcaster and DJ Vogue Williams, TV presenter and DJ Maya Jama,and reigning Celebrity Masterchef champ Riyadh Khalaf, who will join Will Shu to decide who out of the final six nominated restaurants will win the coveted award ‘Restaurant of the Year’.

“I love food, I also love chilling at home as often as I can, so I’m always ordering myself a Deliveroo. I think this year especially, restaurants need to be celebrated for their amazing take away service. I’m delighted to be on the judging panel for Deliveroo’s Restaurant of the year, wishing all of the contestants the best of luck.”

Will Shu, CEO, said: “This year has undoubtedly been one of the most challenging years the restaurant sector has ever faced. Yet in the face of huge uncertainty, we have been inspired by the way restaurants across the UK and Ireland have stepped up and gone the extra mile to support their local communities, while working tirelessly to keep their own businesses going.

“From providing free meals to hospital staff working on the frontline, to delivering meals to vulnerable people, and going above and beyond to protect their staff – we want to recognise and say thank you to our amazing small and independent restaurant partners.”