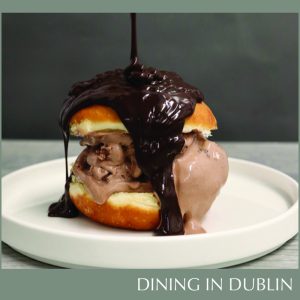 The Rolling Donut announces the opening of their brand new donut dessert bar in Arnotts. The luxury donut brand, who have been delighting Dubliners for over 40 years, this morning opened their largest store yet. The brand is also introducing a new range of decadent dessert options, that are exclusive to Arnotts. For the first time, customers can enjoy new mouth-watering treats such as Red Velvet Donut Waffles, Donut Ice-cream Sandwiches, filled Hot Donut Balls and Chocolate Fondue sharing platters. It doesn’t stop there! Customers can now also choose their own gourmet toppings & signature glazes, to personalise their dessert experience.

The new Arnotts donut & coffee bar will be The Rolling Donut’s seventh store location and will still offer the brand’s much-loved customer favourites, such as the Kinder Beuno, Nutella Hazelnut and Red Velvet sourdough donuts, alongside the new offerings being introduced today. Speaking about the new launch, The Rolling Donut owner, Lisa Quinlan, said:

“I am so excited to be announcing the opening of our new donut dessert bar concept exclusive to Arnotts. It’s incredible to team up with such a well-known, iconic Dublin brand. The space is bright and airy which is ideal for trying out all our new creations. We’ve been very busy working on perfecting our menu & layout of the space which we hope our customers will love. We’ve made sure to keep our plant-based customers happy by providing vegan options for every menu item.”

“We have been months in the kitchen developing and perfecting these new menu offerings, currently exclusive to Arnotts. Our team sat down and asked “what is the most mouth-watering, luxurious dessert you can possibly think of?” And that is how beautiful creations, such as our new Donut Ice-cream sandwiches and hot donut balls were born.”

The new space is approximately 530 square foot, with a modern, clean, stylish design, now trademark of the The Rolling Donut brand. Located at the Abbey Street entrance of Arnotts, the new space comfortably seats 24 customers inside and a further 11 outside. The Rolling Donut brand was first set up in 1978 by Lisa’s father, Michael Quinlan, who went on to establish the iconic Dublin donut kiosk on O’Connell Street in 1988.

“Having grown up working at my Dad’s donut kiosk right across the road from Arnotts, it is a surreal moment to open our new store here today. Arnotts is a Dublin institution, and I know almost all Dubliners instantly recognise the delicious smell of my Dad’s kiosk on O’Connell Street, so the marriage of these two long-standing Dublin retailers makes so much sense to me.”

Speaking about the new partnership, Audrey Owens, Business Development Director for Arnotts said: “Arnotts is delighted to welcome Rolling Donut, the latest addition to the Arnotts food offering. Along with a unique shopping experience, Arnotts is always working towards creating the very best experience for its customers, and the food offering is no exception. We are particularly excited that our customers will enjoy an array of exclusive desserts that will only be available at the new Rolling Donut at Arnotts as well as those from their classic menu.”

To celebrate the launch, The Rolling Donut are offering their first 30 customers a free dessert in the new Arnotts store tomorrow, Friday 13th September.

About The Rolling Donut

“The original Rolling Donut was set up by my father Michael Quinlan in 1978. My dad began running a donut concession called The Rolling Donut and brought it to concerts, shows and festivals around Ireland in the late 70s. Following that, in 1988 he set up the little donut kiosk on O’Connell Street that most Dubliners know and love! 40 years later it continues to make its mark.

I (Lisa) spent my childhood learning all there is to know about donuts & in 2016 decided to expand our range. Our customers wanted filled donuts so I decided to make handcrafted sourdough & vegan donuts making all our fillings in-house using quality ingredients. We now have multiple stores & a team of dedicated bakers who make our donuts, fillings and toppings every day in our bakery in Dublin. We hope to continue to grow & develop the brand making the best quality handcrafted donuts every day!” Lisa

About the new Ice-cream Donut Sandwiches

About the new Hot Donut Balls

A bite sized version of our traditional donut base with choice of filling, signature glaze & two gourmet toppings.

About the new Chocolate Fondue sharing platters Share with a friend! bite-sized version of our traditional donut base with choice of filling, signature glazes & three gourmet toppings.

About the new Cronuts

Share with a friend! Our bite-sized version of our traditional donut base with choice of filled hot donut balls , Two signature glazes & three gourmet toppings.