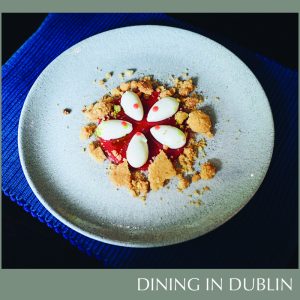 The 10 finalists for this year’s Dairy Chef contest have been selected and will gather in Galway on 1st April for the third-year final of the Franco-Irish competition. Now in its third year, the competition, organised by the French Embassy in Ireland, invites culinary students in top colleges in France and Ireland to create a three-course menu celebrating Irish and French dairy produce. Each dish created must include dairy as the main ingredient or focus of the recipe.

The competition will be assessed this year again by renowned chefs, highlighting the thriving food culture of Galway and Mayo, including Paula Stakelum, Executive Head Pastry Chef at Ashford Castle and JP McMahon, owner of restaurants and cafés in Galway city, including Michelin starred Aniar and Cava Bodega.

They are joined on the French side by Sonia Ezgulian, chef, author and journalist in Lyon, the Embassy of France in Ireland, the National Dairy Council (NDC), the Centre interprofessional de l’économie laitière (Cniel), the Embassy of Ireland in France, the Higher Education Authority and Campus France.

French and Irish Culinary students have submitted 3-courses menus celebrating the best of Irish and French dairy produce inspired by the theme Meitheal*. The standard this year was incredibly high process was not an easy one but here are the 10 finalists selected out of 22 candidates:

The 5 teams have 2 months to prepare the menu they will cook on Wednesday 1st April 2020 in the kitchens of the Galway Mayo Institute of Technology (GMIT), Galway. The cook-off will officially open the 5th FICAHT Forum, taking place until the 4th April in Galway.

The winners will get a chance to do an internship in one of the restaurants represented in the jury: Ashford Castle, Aniar and the kitchen of the French Ministry of Europe and Foreign Affairs.

For further information on entering and details please visit https://ie.ambafrance.org/Dairy-Chef-2020-The-finalists-are