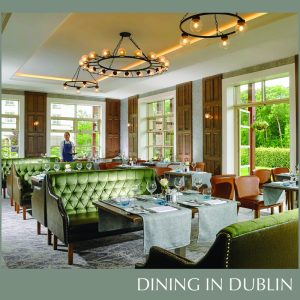 Castleknock Hotel, the award-winning 4-star Dublin hotel, is delighted to announce the appointment of Arder Christie as Executive Head Chef.

With almost 20 years’ experience in the kitchen both in Ireland and abroad, Arder studied at Belfast Institute for Further & Higher Education, graduating with a National Vocational Qualification in Culinary Studies in, before moving to Belfast Metropolitan College where he completed a BTEC Diploma in Business Management in 2011.

A lover of travel, Arder travelled to the Philippines and Malaysia between 2011 and 2015, working as Head Chef in Hotel Celeste and Executive Sous Chef in Edsa Shangri-La Manila, before making a move to The Westin Langkawi Resort & Spa in Malaysia. In 2015, Arder travelled to India to take up the position of Executive Chef in Four Points by Sheraton Dhaka in Bangladesh where he managed daily operations of the hotel’s food and beverage department.

After his time abroad, Arder returned to Ireland in 2016 to work at Carton House as Executive Head Sous Chef, before moving to Dublin to take up the position of Executive Head Chef at Castleknock Hotel.

A lover of dining out, travel and golf, Arder is delighted to be joining the team at Castleknock Hotel. “My career has taken me all over the world and I very much look forward to working with the wonderful team at Castleknock Hotel. It is a fantastic hotel and the perfect base for anyone looking to explore Dublin and I look forward to bringing my international experience to the hotel’s kitchen and restaurants.”