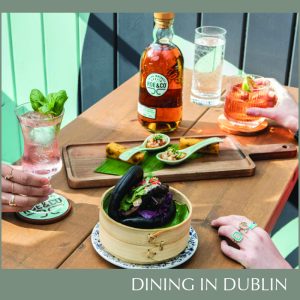 Michelin recommended Big Fan has become well known for its buzzy atmosphere and big flavours. The restaurant was designed and developed by one of the owners with a view to creating a fun space for all where the combination of Chinese craftsmanship and Irish produce is celebrated.

Their aim is to bring lesser-known Chinese dishes to a wider Irish audience with a concentration on sharing plates. The restaurant is creatively led with no hard rules, although there is a concentration on Chinese cuisine influences which are taken from various eastern and western cuisines and practices. At all times, the team are invited to voice their ideas with the hope to be constantly developing. In 2022 Big Fan was added to the Michelin Guide for Ireland and Great Britain.

The kitchen is proudly led by Head Chef Alex Zhang. Originally from Dalian (大连) in Northern China, Alex studied at Dalian Cooking Technical College for Chinese Professional Cookery.  In 2002 he arrived in Ireland to further his career as a chef and attended DIT for Professional Cookery Practice from 2004 to 2006. Alex’s professional culinary journey as a chef in Ireland since 2002 has seen him take up posts in a wide variety of well-respected positions in respected establishments across Dublin.

Roe & Co Whiskey Distillery is bringing a summer of flavour to D8 with a new line up of incredible local chefs. Ethiopian pop up Gursha was followed by Niall Sabongi’s Salty Buoy, and next up is Big Fan, followed by AA Caribbean, La Cocina Cuevas, and finally Vietnom, over the space of four months. Roe & Co Distillery will be celebrating the best of modern Irish cooking through an international lens with these limited pop ups. Running until August 21st there will be four months of exciting cooking paired with specially curated whiskey cocktails, all focused on celebrating modern Irish food and international flavours, hosted in the Cocktail Garden at Roe & Co distillery.