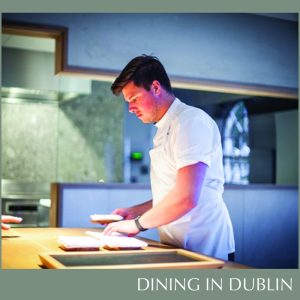 Jordan and his Danish wife Majken Bech Christensen, a front of house manager, moved to Ireland last year to open a brand-new dining experience “Aimsir” a 24-seat restaurant, at Cliff at Lyons.

Opened since May this year, the restaurant uses only seasonal Irish indigenous ingredients.  Its unusual layout, with the kitchen located within the dining space, makes eating there a real treat for customers.

He is no stranger to seeing the accolade hang in his workplace though, as the former head chef of Maaemo, a Norwegian restaurant with three Michelin stars to its name.

Viewers will see his restaurant Aimsir come together – going from a construction site to a classy fine-dining space. “You can just tell it is designed by people who love what they do,” says Mark.

“This is the new benchmark of top end fine-dining in Ireland.”

Speaking about the finished product, Jordan says: “It hasn’t been easy – but I am definitely happy.”

After Jordan gives Mark the Aimsir experience and cooks his meal as Mark watches on, Jordan shares the importance he places on sourcing food from local producers. He explains how business can be risky for suppliers because a crop failure can damage their livelihood. He thinks it is worth a few extra euros to source local ingredients for the restaurant.

Aimsir also has its own garden full of herbs for Jordan to cook with. “It’s so handy,” he says.

The beautiful garden is where the chefs host their pop-up dinner together, with service finishing up inside the restaurant. Tune in next Monday to see how they get on.

Mark Moriarty has been steadily building his reputation as a chef and food innovator for the past 6 years, gaining himself, and Irish cuisine, international recognition.

In 2015, he was named the San Pellegrino World Young Chef of the Year, representing the UK and Ireland region, after 6 months of competition. As the holder of the title, Mark released an 8-course menu showcasing his unique take on Irish cuisine. He toured this menu around the world, hosting pop up restaurants in 12 cities over 12 months, everywhere from a rooftop in Melbourne to a brewery in Johannesburg.

On the back of this, in 2017, Mark was listed on the Forbes 30 under30 list for innovation in the arts sector. Mark is part of the team at The Greenhouse restaurant on Dawson Street in Dublin, which holds one Michelin star. Here he works alongside head chef Mickael Viljanen and the small kitchen brigade.

Cornish-born chef Jordan Bailey (30) and his Danish wife Majken Bech Christensen, a front of house manager, moved to Ireland last year to open a brand new dining experience “Aimsir” a 24-seat restaurant, at Cliff at Lyons in Co Kildare. The restaurant uses only seasonal Irish indigenous ingredients, and had an unusual layout, with the kitchen being located within the dining space.

The restaurant uses only seasonal Irish indigenous ingredients, and has an unusual layout, with the kitchen being located within the dining space. The prep areas and cooking “suite”, include an open flame pit at the back of the room. The pass, where dishes will be finished and plated before being delivered to diners by the chefs, is centre-stage, in the middle of the room.”

Jordan’s decision to shake up the traditional restaurant layout was a bold one, but it has certainly paid off and since opening, Aimsir has been highly praised by critics and diners alike; “Instead of having a chefs’ table, where you’re pulling the guests into the kitchen, we’re pulling the kitchen out to the guests”. Jordan admits that the secret weapon for him is “having Majken next to me, because she just brings the perfect balance of being very professional but also very friendly at the same time.” Jordan is heavily involved with the producers, he thinks they are the unsung heroes of the whole restaurant industry.

About Beyond the Menu

Beyond the Menu is a brand new six-part series for RTÉ One, the final show in the six part series will be broadcast next Monday 14th , featuring new Michelin Star recipient Jordan Bailey.

Presented by award-winning chef, Mark Moriarty, this exciting series goes behind the kitchen doors at some of Ireland’s top restaurants run by young chefs. From Michelin starred establishments and hotly anticipated newcomers to more casual dining experiences, Beyond the Menu gets a unique insight into the people who are making waves in the Irish food scene. Ireland is going through a quiet transformation in fine dining cuisine and Mark wants to celebrate this.

Mark has travelled to  four corners of Ireland, from Donegal to West Cork to meet with other like-minded chefs and spend some time with them both inside and outside the kitchen.

Beyond the Menu is all about showcasing great young chefs, their raw talent and the passion behind why they do it. Mark will learn what makes them and their food tick, what makes them stand out. Mark will create new dishes with each chef as they host a series of pop up nights all around the country.