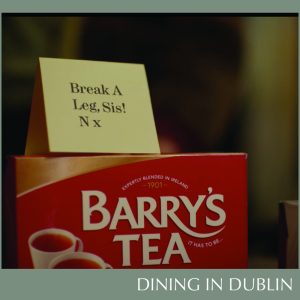 Barry’s Tea has just released ‘Sisters’ its newest TV ad which launched in Ireland last week, across the major broadcast and online channels.

A bedrock brand within the Irish context, Barry’s Tea is well known for its distinctive and memorable advertising style. This newest ad maintains and develops people’s affinity with Barry’s Tea whilst building on the emotional warmth that the brand already evokes.

Shot in Dublin and Brooklyn, New York, ‘Sisters’ tells the true story of older sister, Nora, who has a job in Dublin and her younger sister, Gina, who’s chasing her dream as an actress in New York. Ciara Berkley plays Gina and Stephanie McKeon plays her older sister, Nora. Despite their hectic lives, the sisters always find time to catch up over a cup of Barry’s Tea via Skype calls and WhatsApp chats. For Gina and Nora, their Irishness is very important to them, and something they’re proud of and Barry’s Tea is a signifier of that. The ad celebrates the fun and meaningful moments the sisters share, concluding in a heartwarming climax when Nora surprises her sister by showing up to the opening night of Gina’s play in Brooklyn.

‘Sisters’ features a contemporary version of the 80’s pop classic: I’m Gonna Be (500 Miles) by The Proclaimers. The track was created for the ad and features up-and-coming Irish performer Fya Fox.

Camille O’Flanagan, Barry’s Tea said: “Sisters is a true story about an important relationship between two Irish sisters, played by two brilliant young actresses. So many Irish people have friends and family across the world and I think this is why this story is so emotionally relatable. Although we’re separated at times, Barry’s Tea is often central to the comforting moments that bring people together. This ad captures that and we hope it will be enjoyed, and shared, as much as Barry’s Tea is!“

The ad was created by advertising agency THINKHOUSE. Nick Kelly was the Director of the ad – a filmmaker and Director from Dublin. Kelly is famous for writing Guinness‘s classic ad ‘Quarrel’ the story of two brothers – one in Dublin, one in New York, starring Michael Fassbender. He also wrote and directed “The Drummer and the Keeper” a multi-award winning film about two teenagers who strike up an unlikely friendship.

The new Barry’s Tea ad airs on RTE, Virgin Media and all other major channels as well as across Ireland’s most popular online social and video channels.